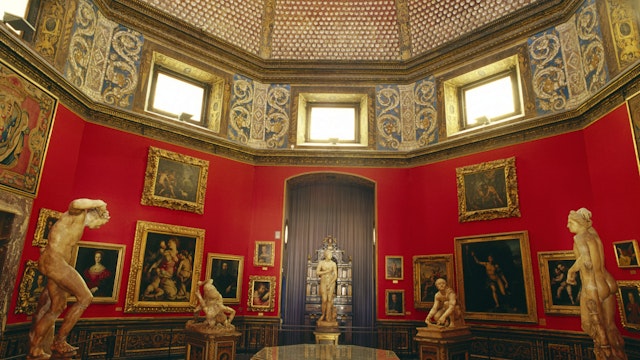 Home to the world's greatest collection of Italian Renaissance art, Florence's premier gallery occupies the vast U-shaped Palazzo degli Uffizi (1560–80), built as government offices. The collection, bequeathed to the city by the Medici family in 1743 on condition that it never leave Florence, contains some of Italy's best-known paintings, including a room full of Botticelli masterpieces.

As part of a gargantuan €65-million refurbishment, the Uffizi has been under constant renovation since 1995, with exhibition space doubling and artworks reorganised to fill – at the last count – some 100 rooms across two floors. The controversially contemporary loggia designed in 1998 for the gallery's exit by Japanese architect Arata Isozaki seems but a pipe dream these days: future projects work will focus more on areas earmarked for temporary exhibitions and conferences. When planning a visit, check on the museum website which rooms are closed that day.

The world-famous collection, displayed in chronological order, spans the gamut of art history from ancient Greek sculpture to 18th-century Venetian paintings. But its core is the Renaissance collection.

Visits are best kept to three or four hours maximum. When it all gets too much, head to the rooftop cafe (aka the terraced hanging garden, where the Medici clan listened to music performances on the square below) for a drink, fresh air and fabulous views. If you've had enough after taking in the gallery's main highlights on the 2nd floor, a 'quick exit' route signposted by the cafe allows you to, well, make a quick exit.

Arriving in the Primo Corridoio (First Corridor) on the 2nd floor, Rooms 1 to 7 are dedicated to pre- and early Renaissance Tuscan art. Among the 13th-century Sienese works displayed in Room 2 are three large altarpieces from Florentine churches by Sienese painter Duccio di Buoninsegna and Florentine masters Cimabue and Giotto. These clearly reflect the transition from the Gothic to the nascent Renaissance style. Note the overtly naturalistic realism overtones in Giotto's portrayal of the Virgin Mary and saints in Le Maestà di Ognissanti (1306–10).

Moving into Siena, Bologna and Pisa in the 14th century, the highlight in Room 3 is Simone Martini's shimmering Annunciazione (1333), painted with Lippo Memmi and setting the Madonna in a sea of gold. Also of note is the Madonna in trono col bambino e angeli (Enthroned Madonna with Child and Angels; 1340) by Pietro Lorenzetti, which demonstrates a realism similar to Giotto's; unfortunately both Pietro and his artistic brother Ambrogio died of the plague in Siena in 1348.

Masters in 14th-century Florence (Room 4) paid as much attention to detail as their Sienese counterparts: savour the realism of the Compianto su Cristo morto (Lamentation over the Dead Christ (1360–65) by gifted Giotto pupil, Giottino.

Piero della Francesca's famous profile portraits (1465) of the crooked-nosed, red-robed duke and the duchess of Urbino occupy centre stage in Room 8. The duke appears from the left side as he'd lost his right eye in a jousting accident, while the duchess is painted a deathly stone-white, reflecting the fact the portrait was painted posthumously. The regal pair are eternalised with the Virtues on the reverse side.

In the same room, Florence's victory over the Sienese at the Battle of San Romano, near Pisa, in 1432, is brought to life with outstanding realism and increased use of perspective in Paolo Uccello's magnificent Battaglia di San Romano (1435–40). Of the handful of masterpieces by Fra' Filippo Lippi – a Carmelite monk who had an unfortunate soft spot for earthly pleasures and scandalously married a nun from Prato – don't miss his fresh, exquisite Madonna col Bambino e due angeli (Madonna and Child with Two Angels; 1460–65). This work clearly influenced his pupil, Sandro Botticelli.

In Room 9, the seven cardinal and theological values of 15th-century Florence by brothers Antonio and Piero del Pollaiolo – commissioned for the merchant's tribunal in Piazza della Signoria – radiate energy. More restrained is Piero's Ritrano di Galeazzo Maria Sforza (Portrait of Galeazzo Maria Sforza; 1471). The only canvas in the theological and cardinal virtues series not to be painted by the Pollaiolos is Fortitude (1470), the first documented work by Botticelli.

The spectacular Sala del Botticelli, numbered as Rooms 10 to 14, but in fact two light and graceful halls, is always packed. Of the many Botticelli works displayed in the Uffizi, the iconic La nascita di Venere (The Birth of Venus; c 1485), Primavera (Spring; c 1482) and Madonna del Magnificat (Madonna of the Magnificat; 1483) are the best known by the Renaissance master known for his ethereal figures. Take time to study the lesser-known Annunciazione (Annunciation), a 6m-wide fresco painted by Botticelli in 1481 for the Ospedale di San Martino alla Scala, a hospital in Florence that took in orphans.

The clear influence northern European artists had on Florentine artists during the Renaissance is explored in Room 15 with works by Flemish painter Hugo van der Goes (1430–82). His monumental Portinari Altarpiece (1476-78) – a triptych 2.5m tall and 3m wide – representing the Adoration of the Shepherds arrived in Florence in 1483 and was displayed in the church inside Florence's Santa Maria Novella hospital. Van der Goes painted it for Tommasso Portinari, director of the Medici bank in Bruges – admire his portrait and that of his wife and their three children on the side panels. A single work by Botticelli is also displayed in this room: Flagellazione di Cristo (Flagellation of Christ; 1505–10), part of a cycle of paintings illustrating the life of Christ, was one of Botticelli's last works before his death from illness and old age in 1510.

The Medici clan stashed away their most precious masterpieces in this exquisite octagonal-shaped treasure trove (Room 18), created by Francesco I between 1581 and 1586. Designed to amaze and perfectly restored to its original exquisite state, a small collection of classical statues and paintings adorn its walls, upholstered in crimson silk, and 6000 mother-of-pearl shells painted with crimson varnish encrust the domed ceiling.

The final rooms in the Primo Corridoio (First Corridor), Rooms 19 to 23, delve into the work of painters in Siena, Venice, Emilia-Romagna and Lombardy in the 15th century. As compelling as the art strung on the walls are the ornate vaulted ceilings here, frescoed in the 16th and 17th centuries with military objects, allegories, battles and festivals held on piazzas in Florence.

Room 34, with sage-green painted walls, evokes the artistic environment in which a young Michelangelo lived and worked in Florence. It displays sculptures from classical antiquity, of great influence on the aspiring sculptor, and from the Medici-owned sculpture garden in San Marco where Michelangelo studied classical sculpture as an apprentice from the age of 13. The master himself, Michelangelo, dazzles with the Doni Tondo, a depiction of the Holy Family that steals the High Renaissance show further down the corridor in Room 41. The composition is unusual – Joseph holding an exuberant Jesus on his mother's muscled shoulder as she twists round to gaze at him, the colours as vibrant as when they were first applied in 1506–08. It was painted for wealthy Florentine merchant Agnolo Doni (who hung it above his bed) and bought by the Medicis for Palazzo Pitti in 1594. The other masterpiece in Room 41 is Raphael's Madonna col Bambino e San Giovanni (Madonna with Child & St John); 1505–106), otherwise known as Madonna del cardellino (Madonna of the Goldfinch) after the red-feathered goldfinch cradled in the chubby hands of a baby John the Baptist. Raphael painted it during his four-year sojourn in Florence and it has hung in the Uffizi since 1704.

Three magnificent early Florentine works by Leonardo da Vinci are brilliantly displayed in beautifully appointed Room 35. His Annunciazione (Annunciation; 1472–75) was deliberately painted to be admired, not face on (from where Mary's arm appears too long, her face too light, the angle of buildings not quite right), but rather from the lower right-hand side of the painting. Adoration of the Magi (1481–82), originally commissioned for the altar of the monastery of San Donato a Scopeto near Florence and never finished, is typical of Florentine figurative painting in the 15th century. Battesimo di Cristo (Baptism of Christ; 1475) depicts John the Baptist baptising a very naturalistic Christ on the banks of the Jordan.

Post coffee- and fresh-air break on the Uffizi's roof terrace, head downstairs to the 1st-floor galleries. Turn left at the bottom of the stairs to delve into the Donazione Contini Bonacossi (Rooms 46 to 55), the private collection of an Italian politician and art collector bequeathed to the Italian state upon his death in 1955 but only on permanent display since 2018. A beautiful glazed terracotta coat of arms (1510–20) by Giovanni della Robbia raises the curtain on the eight-room collection and among the many paintings, sculptures, exquisite maiolica ceramics and pieces of antique furniture, there are works by Veronese, Goya and Tintoretto. The overwhelming highlight is Gian Lorenzo Bernini’s voluptuous marble sculpture (1613–17) of the martyred San Lorenzo writhing above flames as he burns alive on a gridiron.

Returning to the stairwell, bear right to Room 56 – a welcome, vast long space with benches to relax on and blank white walls on which films and digital art compositions are projected. (Room 67 is another empty, relaxation room.)

Rooms 57 to 59, with their deep Bordeaux-red walls, visit the 16th century's transition from High Renaissance to Mannerism in Florence with works by Andrea del Sarto (1486–1530). Considered Michelangelo's artistic heir in Florence by the 1520s, Florentine painter Jacopo Carucci (1494–1557), known simply as Pontormo, fills Room 61. His wholly realistic Madonna col Babino e San Giovanno (Madonna and Child with John the Baptist; 1527–28) hung in the Tribune at the Uffizi from 1589 but was later moved to Palazzo Pitti.

Rooms 64 and 65 are dedicated to Medici portrait artist Agnolo Bronzino (1503–72), who worked at the court of Cosimo I from 1539 until 1555 (when he was replaced by Vasari). His 1545 portraits of the Grand Duchess Eleonora of Toleto and her son Giovanni together, and the 18-month-old Giovanni alone holding a goldfinch – symbolising his calling into the Church – are considered masterpieces of 16th-century European portraiture. Giovanni was indeed elected a cardinal in 1560, but died of malaria two years later.

Works by Caravaggio in Rooms 96 and 97 were deemed vulgar at the time for his direct interpretation of reality. The Head of Medusa (1598–99), commissioned for a ceremonial shield, is supposedly a self-portrait of the young artist, who later died at the age of 39. The biblical drama of an angel steadying the hand of Abraham as he holds a knife to his son Isaac's throat in Caravaggio's Sacrifice of Isaac (1601–02) is glorious in its intensity.

Should you still have any energy for art appreciation, Room 99 provides a glimpse at the Uffizi's collection of 16th- to 18th-century works by foreign artists, namely Rembrandt, Rubens and Van Dyck. Subsequent rooms are dedicated to temporary exhibitions.