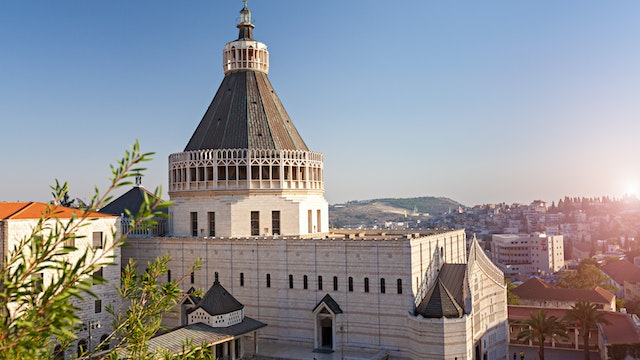 Dominating the Old City’s skyline is the lantern-topped cupola of this Franciscan-run Roman Catholic basilica, an audacious modernist structure that’s unlike any building you’ve ever seen. Constructed from 1960 to 1969, it’s believed by many Christians to stand on the site of Mary’s home, where many churches (but not the Greek Orthodox) believe the Annunciation took place.

The Upper Basilica, its soaring dome shaped like an inverted lily, ‘glorifies Mary as the Mother of God’. With lovely mid-20th-century flair, the bare cast concrete is adorned with indented dots.

In the dimly lit lower church, a sunken enclosure shelters the Grotto of the Annunciation, the traditional site of Mary’s house, and remnants of churches from the Byzantine (4th century) and Crusader (12th century) eras.

The walls of the courtyard and the upper church are decorated with a series of vivid mosaic panels, donated by Catholic communities around the world, depicting Mary and the infant Jesus in styles that boldly reflect the cultures of their countries of origin. A panel from Brazil was added in 2016.

Confessions can be made in a variety of languages from 8.30am to 11.30am and 3pm to 5pm. Regular events:

Angelus Prayer At noon daily, in the Grotto

Live webcasts of some events can be seen via www.cmc-terrasanta.com.

Free brochures in a dozen languages – and shawls and skirts to cover exposed shoulders and knees (deposit of ID required) – are available at the Pilgrims Office, 20m to the left of the basilica’s main gate. Inquiries can be sent in by email.