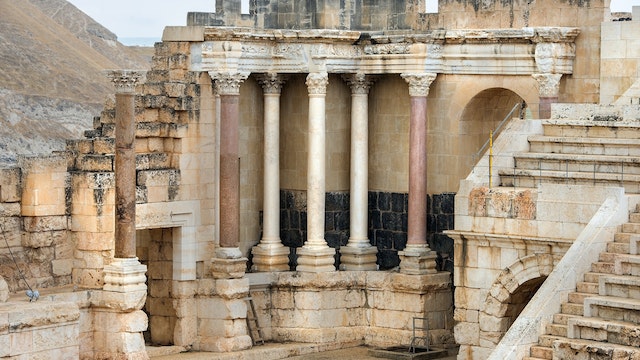 Beit She’an’s extraordinary Roman ruins are the best place in Israel to get a sense of what it was like to live, work and shop in the Roman Empire. Colonnaded streets, a 7000-seat theatre that looks much as it did 1800 years ago (the original public bathrooms are nearby), two bathhouses and huge stone columns that lie right where they fell during the 749 earthquake evoke the grandeur, self-confidence and decadence of ancient Roman provincial life.

The path to the theatre and the Cardo, the hugely impressive colonnaded main street, is wheelchair accessible.

Towering over the Roman city, known in Greek as Scythopolis, is Tel Beit She’an, created by at least 20 cities built and rebuilt one on top of the other. The viewpoint atop the tel offers near-aerial views of the Roman ruins.

On Monday to Thursday evenings from March to November, She’an Nights, an after-dark multimedia spectacular in English or Hebrew (adult/child 55/45NIS), brings alive the ruins with projected images but is not a satisfactory substitute for a daylight visit – it's too dark to read the signs and most of the site is off-limits. The show is cancelled if it rains. Call ahead for reservations on 04-648-1122 or 1222-3639.

To get to the park entrance, head down the hill for a few hundred metres from the Bank Leumi branch at 81 Sha'ul HaMelech St.