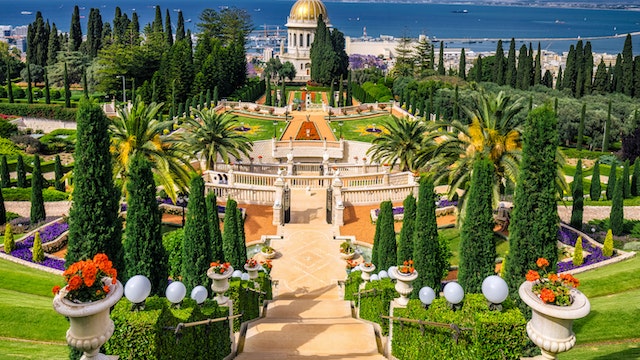 These formal gardens flowing down 19 steep terraces to a resplendent domed shrine – the final resting place of the prophet-herald of the Baha’i faith – are Haifa’s crowning attraction. There are bird’s-eye views from the platform at the top, but we highly recommend the free, 45-minute Panorama Tour. Tours begin daily (except Wednesday) at 11.30am in Hebrew and noon in English. Arrive half an hour ahead as it's first come, first served. Men and women must be covered from shoulders to knees.

The gardens are tended by the Baha’i World Centre, the religion’s global headquarters. Emerald lawns and bright flower beds ripple down to the Shrine of the Báb, which is even more dazzling against a backdrop of deep blue Haifa Bay. Completed in 1953, this glinting dome guards the mortal remains of the Báb, the spiritual predecessor to the Baha’i faith’s main prophet Baha’ullah. After persecution and imprisonment, the Báb was executed in Persia in 1850 and his remains were secretly kept by his followers. They were brought to Haifa in 1909 and Baha’ullah chose this spot for the Báb’s burial place. Combining the style and proportions of European architecture with motifs inspired by Eastern traditions, it was designed by a Canadian architect, built with Italian stone and decorated with Portuguese fire-glazed tiles.

Framing the shrine, the gardens were laid out on the slopes of Mt Carmel between 1989 and 2001. They were given Unesco World Heritage status in 2008 along with Akko’s Shrine of Baha’ullah. Impressively symmetrical, the well-tended terraces have a regal feel: gurgling fountains, flower beds, stone eagles, hedges trimmed into eight-pointed stars, and lawns with barely a blade of grass out of place. (Suddenly, the stringent rules of conduct – no food, no smoking, no setting foot on the lawns – make a whole lot of sense.) The gardens are illuminated throughout the night, a spiritual solace for the Báb’s years of imprisonment in near-darkness; you can enjoy this sparkling view from the German Colony.

Buildings (closed to the public) around the gardens include the Universal House of Justice, a domed neoclassical structure with Corinthian columns from which the Baha’is’ spiritual and administrative affairs are governed; and the Archives, in a green-roofed structure that looks like the Parthenon, in which are kept more than 100 different translations of the Kitáb-i-Aqdas, the holy book of the Baha’i faith.

To get to the start of the Panorama Tour from Carmel Centre (the Carmelit’s Gan HaEm stop), walk 1km north along Yefe Nof St, which affords the city’s finest bay views. Alternatively, from Bat Galim Egged bus 136 zigzags via Ben Gurion Blvd up to HaNassi Ave (parallel to Yefe Nof). The tour finishes down on HaTziyonut Blvd – to get back up to Carmel Centre, there is usually a sherut (10NIS) waiting; count on paying about 30NIS for a taxi. Bus 115 links the lower entrance on HaTziyonut Blvd with Haifa-Hof HaCarmel bus station and Talpiot market.

Note that the line for the Panorama Tour can be long when there’s a cruise liner or US Navy ship in port. Admission is limited to 60 people (120 if there are two guides available). See the website for a monthly schedule of less regular tours in Russian and Arabic.