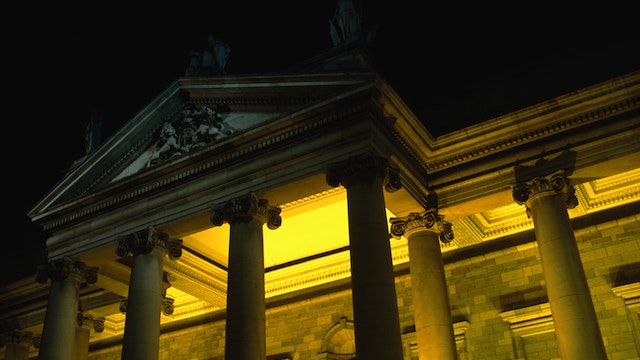 A sweeping Palladian pile occupying one side of College Green, this magnificent building was the Irish Parliament House until 1801 and was the first purpose-built parliament building in the world. The original building – the central colonnaded section that distinguishes the present-day structure – was designed by Sir Edward Lovett Pearce in 1729 and completed by James Gandon in 1733.

When the parliament voted itself out of existence through the 1801 Act of Union, the building was sold under the condition that the interior would be altered to prevent it ever again being used as a debating chamber. It was a spiteful strike at Irish parliamentary aspirations, but while the central House of Commons was remodelled and offers little hint of its former role, the smaller House of Lords (admission free) survived and is much more interesting. It has Irish oak woodwork, a mahogany longcase parliament clock and a late-18th-century Dublin crystal chandelier. Its design was copied for the construction of the original House of Representatives in Washington, DC, now the National Statuary Hall. The House of Lords is open to visitors during banking hours.