in North of the Liffey 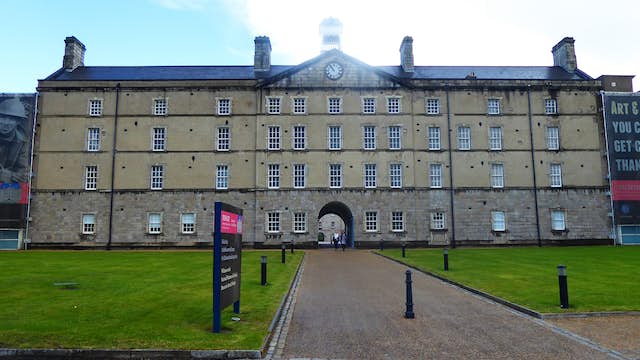 Once the world’s largest military barracks, this splendid early neoclassical grey-stone building on the Liffey’s northern banks was completed in 1704 according to the design of Thomas Burgh (he of Trinity College's Old Library). It is now home to the Decorative Arts & History collection of the National Museum of Ireland, with a range of superb permanent exhibits ranging from a history of the 1916 Easter Rising to the work of iconic Irish designer Eileen Gray (1878–1976).

The building's central square held six entire regiments and is a truly awesome space, surrounded by arcaded colonnades and blocks linked by walking bridges. Following the handover to the new Irish government in 1922, the barracks were renamed to honour Michael Collins, a hero of the struggle for independence, who was killed that year in the Civil War; to this day most Dubliners refer to the museum as the Collins Barracks. Indeed, the army coat Collins wore on the day of his death (there's still mud on the sleeve) is part of the Soldiers and Chiefs exhibit, which covers the history of Irish soldiery at home and abroad from 1550 to the 21st century.

The museum's exhibits include a treasure trove of artefacts ranging from silver, ceramics and glassware to weaponry, furniture and folk-life displays. The fascinating Way We Wore exhibit displays Irish clothing and jewellery from the past 250 years. An intriguing sociocultural study, it highlights the symbolism jewellery and clothing had in bestowing messages of mourning, love and identity. The old Riding School is home to Proclaiming a Republic: The 1916 Rising, which opened in 2016 as an enhanced and updated version of the long-standing exhibit dedicated to the rebellion. The display explores the complicated socio-historical background to the Rising and also includes visceral memorabilia such as firsthand accounts of the violence of the Black and Tans and post-Rising hunger strikes, and the handwritten death certificates of the Republican prisoners and their postcards from Holloway prison. Some of the best pieces are gathered in the Curator’s Choice exhibition, which is a collection of 25 objects hand-picked by different curators and displayed alongside an account of why they were chosen.