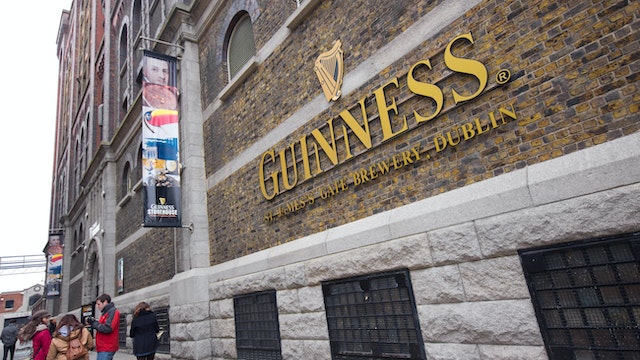 The most popular attraction in Dublin is this multimedia homage to Guinness. An old fermentation plant in the St James's Gate Brewery has been converted into a seven-storey museum devoted to the beer, the company’s history, how the beer is made and how it became the brand it is today. The top floor Gravity Bar is an atrium bar, where you can test your pouring power and drink a pint; just below it is an excellent restaurant for lunch.

Since Arthur Guinness (1725–1803) founded the brewery in 1759, the operation has expanded down to the Liffey and across both sides of the street; at one point, it had its own railway and there was a giant gate stretching across St James's St, hence the brewery's proper name, St James’s Gate Brewery. At its apogee in the 1930s, it employed over 5000 workers, making it the largest employer in the city. Increased automation has reduced the workforce to around 600, but it still produces 2.5 million pints of stout every day.

The tour is spread across 1.6 hectares, involving an array of audiovisual and interactive displays that cover pretty much all aspects of the brewery's history and the brewing process. You'll even learn how to perfect the famous two-part pour in the vertiginous heights of the Gravity Bar. The tour takes about 90 minutes and tickets cost from €18.50 per adult.

Die-hards can opt for the upgraded Connoisseur Experience, where a designated barkeeper goes through the histories of the four variants of Guinness – Draught, Original, Foreign Extra Stout and Black Lager – and provides delicious samples of each. Tickets cost €55.

In 2020, the Storehouse launched a Behind-the-Gate tour, bringing visitors to parts of St James's Gate that were previously off limits to the public. Tickets cost €95.

Other add-ons include the STOUTie, the stout equivalent of latte art, where a pretty good likeness of yourself is drawn in the creamy head of the pint. Strictly for photographs, of course.

The experimental Open Gate Brewery is just around the corner, where you can test a sample board of Guinness or enjoy a selection of craft beers and food. There's also a choice of distillery experiences nearby, including Teeling and Roe & Co. For lunch try Groundstate, or head to Container Coffee for a takeaway hot drink - both are within walking distance. The Storehouse is in the Liberties district so you're surrounded by a great selection of restaurants and traditional pubs.

The 123 bus will take you from the city center to the Guinness Storehouse; it has stops on O'Connell Street and Dame Street.