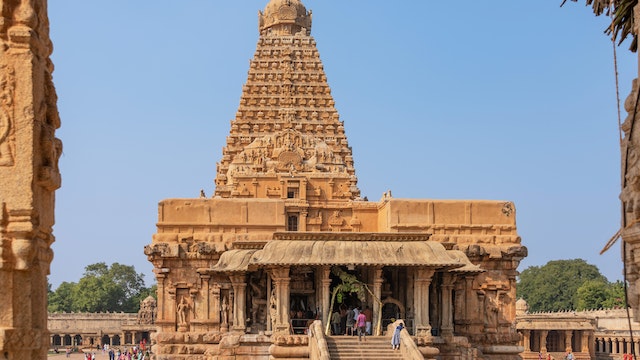 Come here twice: in the morning, when the honey-hued granite begins to assert its dominance over the white dawn sunshine, and in the evening, when the rocks capture a hot palette of reds, oranges, yellows and pinks on the crowning glory of Chola temple architecture. The World Heritage–listed Brihadishwara Temple was built between 1003 and 1010 by Raja Raja I (‘king of kings’). The outer fortifications were put up by Thanjavur's later Nayak and British regimes.

You enter through a Maratha-era gate, followed by two original gopurams with elaborate stucco sculptures. You might find the temple elephant under one of the gopurams. Several shrines are dotted around the extensive grassy areas of the walled temple compound, including one of India’s largest statues of Nandi (Shiva’s sacred bull), facing the main temple building. Cut from a single rock and framed by slim pillars, this 16th-century Nayak creation is 6m long. Don't miss the sublime sculptures at the shrine dedicated to Lakshmi, to the right of Nandi when entering the complex.

A long, columned assembly hall leads to the central shrine with its 4m-high Shiva lingam, beneath the superb 61m-high vimana (tower). The assembly hall's southern steps are flanked by two huge dwarpals (temple guardians). Many graceful deity images stand in niches around the vimana's lower outer levels, including Shiva emerging from the lingam (beside the southern steps); Shiva as the beggar Bhikshatana (first image, south side); Shiva as Nataraja, the cosmic dancer (west end of south wall); Harihara (half Shiva, half Vishnu) on the west wall; and Ardhanarishvara (Shiva as half-man, half-woman), leaning on Nandi, on the north side. Between the deity images are panels showing classical dance poses. On the vimana's upper east side is a later Maratha-period Shiva within three arches.

The compound also contains an interpretation centre along the south wall and, in the colonnade along the west and north walls, hundreds more linga. Both west and north walls are lined with exquisite lime-plaster Chola frescoes, for years buried under later Nayak-era murals. North of the temple compound, but still within the outer fortifications, are the 18th-century neoclassical Schwartz's Church and a park containing the Sivaganga tank.

Official guides can be hired at the tourist information booth just outside the temple for 90-minute tours (₹500).