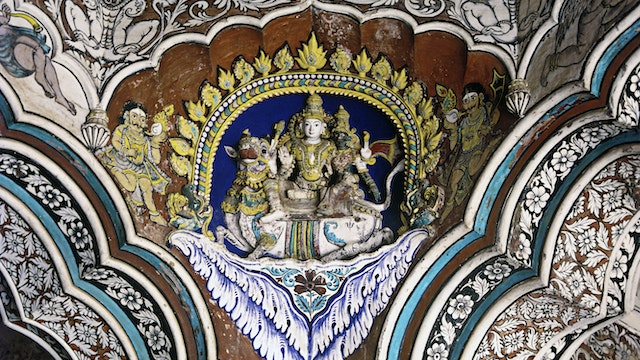 Thanjavur’s royal palace is a mixed bag of ruin and renovation, superb art and random royal paraphernalia. The mazelike complex was constructed partly by the Nayaks who took over Thanjavur in 1535, and partly by a local Maratha dynasty that ruled from 1676 to 1855. The two don't-miss sections are the Saraswati Mahal Library Museum and the Art Gallery.

Seven different sections of the palace can be visited. ‘Full’ tickets include the Art Gallery and Saraswati Mahal Library Museum, along with the Mahratta Dharbar Hall, bell tower and Saarjah Madi; other sections require extra tickets. The main entrance is from the north, off East Main St. On the way in you’ll come to the main ticket office, followed by the Maratha Palace complex.

Past the ticket office, a passage to the left leads to: first, the Royal Palace Museum (₹2), a small miscellany of sculptures, weaponry, elephant bells and rajas’ headgear; second, the Maharaja Serfoji Memorial Hall (₹4), commemorating the enlightened Maratha scholar-king Serfoji II (1798–1832), with a better collection overlooking a once-splendid, now crumbling courtyard; and third, the Mahratta Dharbar Hall (open 10am to 5pm), where Maratha rulers gave audience in a grand but faded pavilion adorned with colourful murals (including their own portraits behind the dais) and sturdy pillars topped by arches filled with gods.

Exiting the passage, the fabulous Saraswati Mahal Library Museum is on your left, through a vibrant entranceway. Perhaps Serfoji II’s greatest contribution to posterity, this is testimony both to the 19th-century obsession with knowledge accumulation and to an eclectic mind that collected prints of Chinese torture methods, Audubon-style paintings of Indian flora and fauna, world atlases, dictionaries and rare medieval books. Serfoji amassed more than 65,000 books and 50,000 palm-leaf paper manuscripts in Indian and European languages, though most aren’t displayed. Hourly audiovisual displays (10.30am to 4.30pm) highlight Thanjavur’s sights, history and traditions in the attached cinema room.

Leaving the library, turn left for the Art Gallery, set around the Nayak Palace courtyard behind the bell tower. It contains a collection of stone carvings and superb, mainly Chola, bronzes, including some fabulous Natarajas in the New Visitors Hall; its main room, the 1600 Nayak Durbar Hall, has a statue of Serfoji II. From the courtyard, steps lead part of the way up a large gopuram-like tower to a whale skeleton that washed up in Tharangambadi.

The renovated Saarjah Madi is best admired from East Main Rd for its ornate balconies.