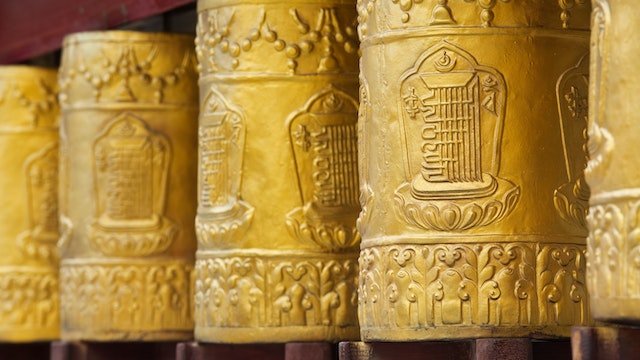 Founded in AD 996, and retaining five sub-temples dating back over 900 years, Tabo Gompa is reckoned to be the oldest continuously functioning Buddhist monastery in India. Don't expect the towering, colourful structures of Ladakh: the temples here are low-rise structures whose uncoloured mud exteriors are faintly reminiscent of ancient Malian mosques. Without artificial light, the half-dark intensifies the mystique of the interiors, albeit making it hard to see the detail of many masterpieces of mural and sculpture. No photography inside.

The old gompa's undoubted highlight is the Tsuglkang (main assembly hall) dating back to the monastery's first foundation, possibly by Ringchen Zangpo, the Great Translator. It is entered through the muralled 16th-century Zal-ma antechamber where bags, phones, cameras and torches must be left behind. Two blue protector deities in wonderfully naïve style guard the next doorway, behind which the hall's walls are lined with a remarkable array of near life-size clay sculptures: 28 bodhisattvas plus two more protectors. Murals below depict 10th-century life. The hall's focus is a statue of a four-bodied Vairochana Buddha turning the wheel of law, the whole room being a 3D representation of the Vajradhatu mandala with Vairochana at its centre. Behind, venturing into the unlit inner sanctuary is an eerie experience, with silhouettes of unseen figures suddenly appearing from the gloom as you try to make out the features of a stucco Amitabha Buddha.

To see inside the other smaller sub-temples you might need to ask an attendant to unlock them. Most dramatic of these is the Byams-Pa Chen-po Lha-Khang containing a 3m-high statue of the Maitreya (future Buddha) draped in golden cloth and holding up a reddened palm in a sign of meditation.

Just outside the ancient compound is a sparkling gilded chorten with bulbous midriff, and a brand new monastery, which is where most of the 50 or so monks spend their time. However, despite its partial museumisation, the old gompa still has chanting ceremonies at 6am (one hour) and 4.40pm (20 minutes). You're not allowed in at these times but can enjoy the sounds from outside the building.