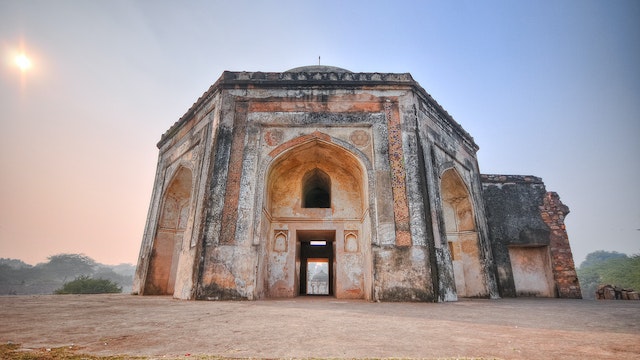 There are extraordinary riches scattered around Mehrauli, with more than 440 monuments – from the 10th century to the British era – dotting a forest and the village itself behind the forest. In the forest, most impressive are the time-ravaged tombs of Balban and Quli Khan, his son, and the Jamali Khamali mosque, attached to the tomb of the Sufi poet Jamali. To the west is the 16th-century Rajon ki Baoli, Delhi's finest step-well.

At the northern end of Mehrauli village is Adham Khan’s Mausoleum, which was once used as a British residence, then later as a police station and post office. Leading northwards from the tomb are the pre-Islamic walls of Lal Kot.

To the south of the village are the remains of the Mughal palace, the Zafar Mahal, once in the heart of the jungle. Next door to it is the Sufi shrine, the Dargah of Qutab Sahib. There is a small burial ground with one empty space that was intended for the last king of Delhi, Bahadur Shah Zafar, who died in exile in Burma (Myanmar) in 1862. South of here is a Lodi-era burial ground for hijras (transvestites and eunuchs), Hijron ka Khanqah. The identity of those buried here is unknown, but it's a well-kept, peaceful place, revered by Delhi's hijra community. A little further south are Jahaz Mahal ('ship palace', also built by the Mughals) and the Haus i Shamsi tank.

Wild pigs scamper about the forest, while bright-green parakeets and large black kites swoop from tree to tree. Troops of monkeys clamber across the ruins, especially at dusk. Stone pillars with the names of the main sights carved onto them guide you along the maze-like network of dusty forest pathways; don't come here too late in the day, as it can be easy to get lost.

You can reach the forested part of the park by turning right out of Qutab Minar metro station then taking the small gate on your left, just as you reach the slip road that leads up to Qutab Minar. Note, there is no obvious entrance with English signage, but you'll notice the landscaped park-like area from the road.