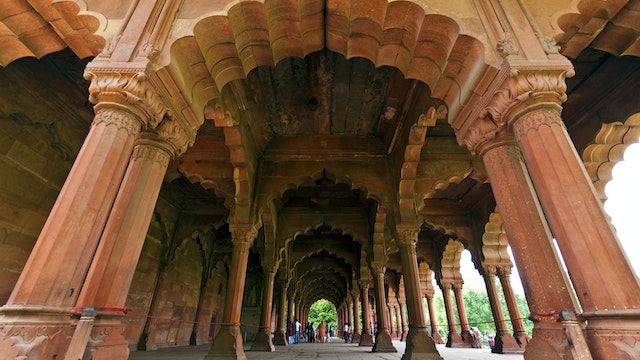 Founded by Emperor Shah Jahan and surrounded by a magnificent 18m-high wall, this fort took 10 years to construct (1638–48) and is rumoured to have had the decapitated bodies of prisoners built into the foundations for luck. It once overlooked the Yamuna River, which has now shrunk to some distance away. A tree-lined waterway, known as nahr-i-bihisht (river of paradise), once ran out of the fort and along Chandni Chowk, fed by the Yamuna.

The last Mughal emperor of Delhi, Bahadur Shah Zafar, was flushed from the Red Fort in 1857 and exiled to Burma (Myanmar) for his role in the First War of Independence. The British destroyed buildings and gardens inside the fortress walls and replaced them with barrack blocks for the colonial army.

The audio guide tour, by acclaimed company Narrowcasters, is worthwhile as it brings the site to life.

Controversially, in 2018 the government leased out the job of maintaining the fort to a private firm, the Dalmia Bharat Group, prompting accusations from conservationists that it had sold the country's heritage. Dalmia soon began wholesale renovations, including laying new red-sandstone pathways over some of the existing quartzite stone paths.

At the time of writing, all the Red Fort's museums were closed for renovations. With the exception of the arcades at Chatta Chowk and Diwan-i-Am, it was not possible to enter the interiors of the buildings inside the fort, but the main structures are expected to reopen once renovations are complete. The fort's sound-and-light show was also suspended as part of the revamp.