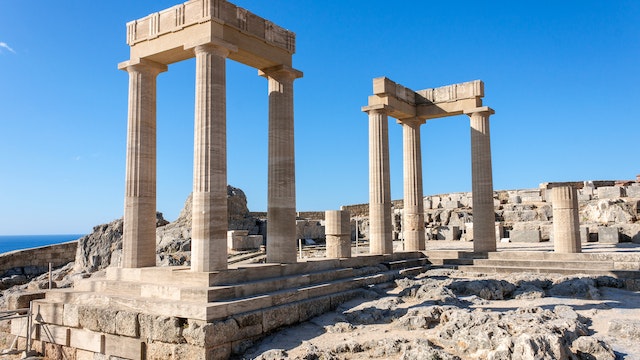 A short, steep-stepped footpath climbs the rocky 116m-high headland above the village to reach Lindos’ beautifully preserved Acropolis. First fortified in the 6th century BC, the clifftop is now enclosed by battlements constructed by the Knights of St John. Once within the walls, you’re confronted by ancient remains that include the Temple to Athena Lindia and a 20-columned Hellenistic stoa. Silhouetted against the blue sky, the stark pillars are dazzling, while the long-range coastal views are out of this world.

Be sure to pack a hat and some water, as there’s no shade at the top, and take care to protect young kids from the many dangerous drop-offs.

Donkey rides follow a longer pathway to the Acropolis from the village entrance (€8), an option that spares you a mere three minutes of exposed walking on the hillside. Animal-rights groups strongly urge visitors to consider how the donkeys are treated before deciding to ride.