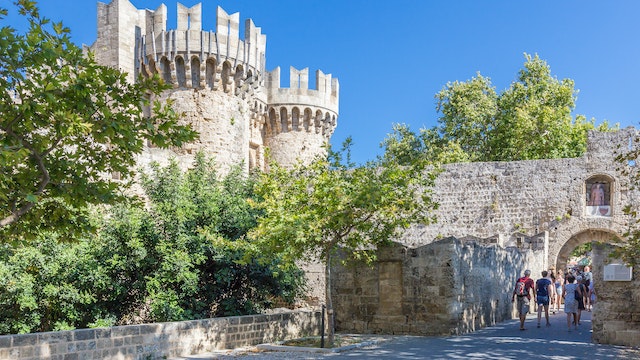 Essentially an occupying army, the Knights of St John transformed the northern segment of the Old Town during the 14th and 15th centuries, to create what’s known today as the Knights’ Quarter. Taking care to protect themselves from the local population as well as potential invaders, the knights erected mighty fortress-like mansions as well as a fortified palace.

Begin your tour of the Knights’ Quarter at Liberty Gate, crossing the small bridge into the Old Town. Across the pebbled street, take in the remains of the 3rd-century-BC Temple of Aphrodite, one of the few ancient ruins in the Old Town.

Continue down Apellou to the former 15th-century Knights’ Hospital, now reincarnated as the Archaeological Museum. Its biggest draw is the exquisite Aphrodite Bathing, a 1st-century-BC marble statue recovered from the local seabed.

Wander up the Street of the Knights (Ippoton), once home to the knights themselves. They were divided into seven ‘tongues’ or languages, according to their place of origin – England, France, Germany, Italy, Aragon, Auvergne and Provence – and each was responsible for protecting a section of the fortifications. The Grand Master, who was in charge, lived in the palace. To this day the street exudes a noble, forbidding aura.

First on the right, if you begin at the eastern end, is the 1519 Inn of Italy, with the Palace of Villiers de l’Isle Adam alongside. Next along is the Inn of France, the most ornate and distinctive of all the inns.

Further up, the Chapelle Française is embellished with a statue of the Virgin and Child. Next comes the residence of the Chaplain of the Inn of France. Across the alleyway is the Inn of Provence, with four coats of arms forming the shape of a cross, while opposite is the Inn of Spain. To the left at the top of the street, the ruined St John of the Collachio was originally a knights’ church, linked to the palace across the road by an underground passage.

On the right is the truly magnificent 14th-century Palace of the Grand Master. Severely damaged by the Turkish siege, then devastated by an explosion in the mid-1800s, it was rebuilt by the Italians, who introduced a grandiose, lavish interior. The random displays of accumulated loot in the upstairs chambers are unenthralling, but there are two excellent museums downstairs, covering Ancient Rhodes and the medieval era.

From the palace, walk through St Anthony’s Gate to reach the atmospheric D’Amboise Gate, a wonderful path that leads you across the moat.

During limited weekday hours, you can also access the top of the walls from the palace courtyard, affording great views into the Old Town and across to the sea. Another option is to drop down at St Anthony’s Gate and walk along the bucolic moat itself.