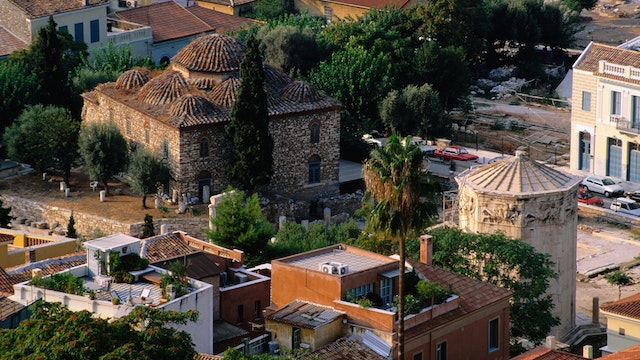 This was the city’s market area under Roman rule, and it occupied a much larger area than the current site borders. You can see a lot from outside the fence, but it's worth going in for a closer look at the well-preserved Gate of Athena Archegetis, the propylaeum (entrance gate) to the market, as well as an Ottoman mosque and the ingenious and beautiful Tower of the Winds, on the east side of the site.

The gate, formed by four Doric columns, was financed by Julius Caesar and erected sometime during 10 BC. To the right of the entry, look also for the outlines of what was a 68-seat public latrine. Squatting atop one wing of the agora is the 17th-century Fethiye Mosque, now restored and housing temporary exhibitions. The mosque's interior frescoes have been lost – except for a tiny patch high on the back wall.