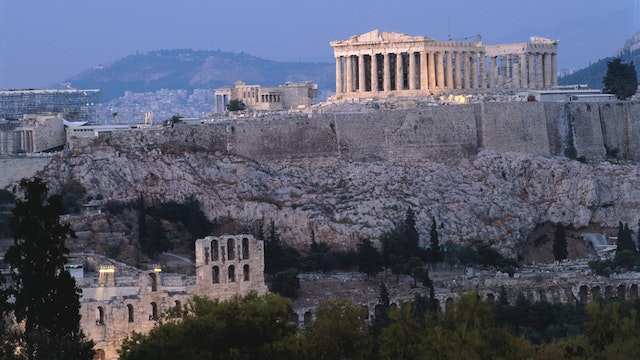 The Acropolis is the most important ancient site in the Western world. Crowned by the Parthenon, it stands sentinel over Athens, visible from almost everywhere within the city. Its monuments and sanctuaries of white Pentelic marble gleam in the midday sun and gradually take on a honey hue as the sun sinks, while at night they stand brilliantly illuminated above the city. A glimpse of this magnificent sight cannot fail to exalt your spirit.

Inspiring as these monuments are, they are but faded remnants of the city of Pericles, who spared no expense – only the best materials, architects, sculptors and artists were good enough for a city dedicated to the cult of Athena. It was a showcase of lavishly coloured buildings and gargantuan statues, some of bronze, others of marble plated with gold and encrusted with precious stones.

The Acropolis was first inhabited in Neolithic times (4000–3000 BC). The earliest monumental buildings were constructed here during the Mycenaean era. People lived on the Acropolis until the late 6th century BC, but in 510 BC the Delphic oracle declared it the sole province of the gods.

After all the buildings on the Acropolis were reduced to ashes by the Persians on the eve of the Battle of Salamis (480 BC), Pericles set about his ambitious rebuilding program. He transformed the Acropolis into a city of temples, which has come to be regarded as the zenith of Classical Greece.

Ravages inflicted during the years of foreign occupation, pilfering by foreign archaeologists, inept renovations following Independence, the footsteps of millions of visitors, earthquakes and, more recently, acid rain and pollution have all taken their toll on the surviving monuments. The worst blow was in 1687, when the Venetians attacked the Turks, opening fire on the Acropolis and causing an explosion in the Parthenon – where the Turks had been storing gunpowder – and damaging all the buildings.

The Acropolis became a World Heritage-listed site in 1987. Major restoration programs are ongoing, and most of the original sculptures and friezes have been moved to the Acropolis Museum and replaced with casts. Restoration at the site is ongoing and there are almost always hordes of tourists here – visit very early in the morning or last thing at night to avoid the worst of the crowds.

The one modern detail on the hill (aside from the ever-present scaffolding and cranes) is the large Greek flag at the far eastern end. In 1941, early in the Nazi occupation, two teenage boys climbed up the cliff and raised the Greek flag; their act of resistance is commemorated on a brass plaque nearby. From here, you can look down into the Temple of Olympian Zeus.

From November to March, admission is free on the first Sunday of the month. A combo ticket (€30) permits entry to the Acropolis and six other sites within five days.