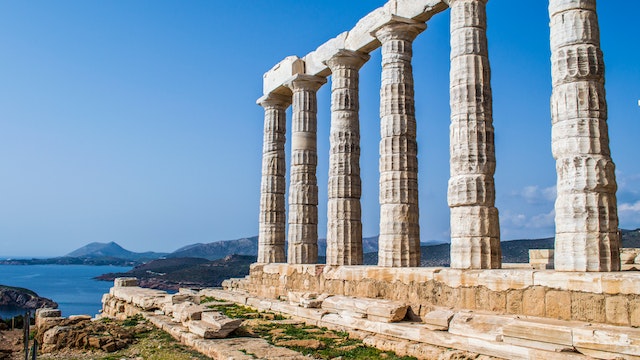 The Ancient Greeks knew how to choose a site for a temple. At Cape Sounion, 70km south of Athens, the Temple of Poseidon stands on a craggy spur that plunges 65m to the sea. Built in 444 BC – same year as the Parthenon – of marble from nearby Agrilesa, it is a vision of gleaming white columns. Sailors in ancient times knew they were nearly home when they saw the first glimpse of white; views from the temple are equally impressive.

On a clear day you can see Kea, Kythnos and Serifos to the southeast, and Aegina and the Peloponnese to the west.

It is thought that the temple was built by Iktinos, the architect of the Temple of Hephaistos in Athens' Ancient Agora. Sixteen of the slender Doric columns remain. The site also contains scant remains of a propylaeum, a fortified tower and, on a lower hill to the northeast, a 6th-century temple to Athena.

As with all major sites, it's best to visit first thing in the morning, or head there for sunset to enact Byron's lines from Don Juan: 'Place me on Sunium’s marbled steep/Where nothing save the waves and I/May hear our mutual murmurs sweep.'

Byron was so impressed by Sounion that he carved his name on one of the columns (sadly, many other not-so-famous travellers followed suit).

There is a decent cafe-restaurant at the site, and from the parking lot at the Athena temple, a steep path leads down to a small beach. If you want more room or variety, you'll need a car, or a short bus ride, to reach the nearby bigger beaches and tavernas. There is a pretty, if busy, beach near the site to the west, plus some nice wilder areas along the west-coast road towards Sounio town.

The site is a common package day-trip from Athens; this is the easiest way to visit. KTEL also runs frequent buses from the Mavromateon Terminal in Athens; the buses also stop near Syntagma. The ride along the coast road takes about two hours.