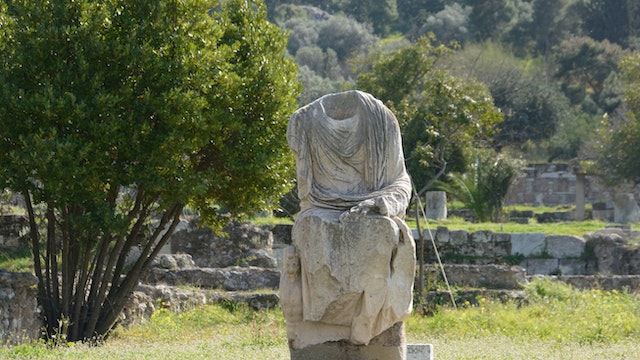 The Agora was ancient Athens' heart, the lively hub of administrative, commercial, political and social activity. Socrates expounded his philosophy here; in AD 49 St Paul came here to win converts to Christianity. The site today is a lush respite, home to the grand Temple of Hephaistos, a good museum and the 11th-century Byzantine Church of the Holy Apostles, trimmed in brick patterns that mimic Arabic calligraphy. The greenery harbours birds and lizards. Allow about two hours to see everything.

First developed as a public site in the 6th century BC, the Agora was devastated by the Persians in 480 BC, but a new one was built in its place almost immediately. It was flourishing by Pericles' time and continued to do so until AD 267, when it was destroyed by the Herulians, a Gothic tribe from Scandinavia. The Turks built a residential quarter on the site, but this was demolished by archaeologists after Independence and later excavated to Classical and, in parts, Neolithic levels.