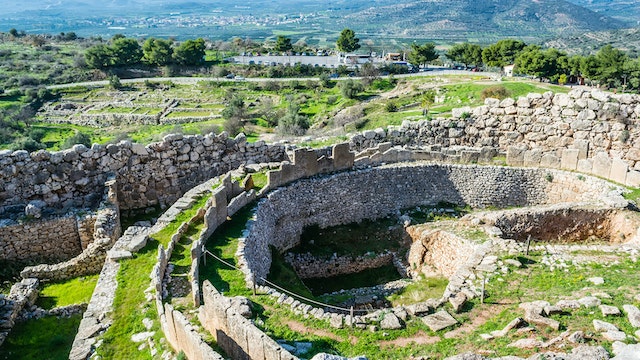 On a hilltop backed by powerful mountains stand the sombre and mighty ruins of Ancient Mycenae, home of Agamemnon, the legendary king who commanded the Greeks during the Trojan War. For four centuries in the second millennium BC, this kingdom was the most powerful in Greece, holding sway over the whole region and influencing other Mycenaean cities.

The World Heritage-listed Mycenae is synonymous with the names Homer and Schliemann. In the 9th century BC Homer told in his epic poems, 'Iliad' and 'Odyssey', of ‘well-built Mycenae, rich in gold’. These poems were, until the 19th century, regarded as no more than gripping and beautiful legends. But in the 1870s the amateur archaeologist Heinrich Schliemann (1822–90), despite derision from professionals, struck gold, first at Troy then at Mycenae.

This link, between the mythical and factual, runs thick through Mycenae's history. According to Homer, the city was founded by Perseus, the son of Danae (a princess) and Zeus (a god); and by King Agamemnon’s time, the Royal House of Atreus, which ruled Mycenae, was the most powerful of the Achaeans (Homer’s name for the Greeks).

Whether Agamemnon and his family ever existed is uncertain. However, the archaeological facts are that Mycenae was first settled in the Neolithic period and came to prominence in the late Bronze Age, from about 1600 BC. In the wake of the Indo-European wave that arrived in Greece between 2100 and 1900 BC, and influenced by the already-present Minoan and Cycladic civilisations, an advanced culture developed on the mainland. This new civilisation is now referred to as the Mycenaean, named after its most powerful kingdom. The other kingdoms included Pylos, Tiryns, Corinth and Argos, all in the Peloponnese. Evidence of Mycenaean civilisation has also been found at Thiva (Thebes) and Athens.

The city of Mycenae consisted of a fortified citadel and surrounding settlement, at its height from 1450 to 1200 BC. Due to the sheer size of the 'Cyclopean' walls (13m high and 7m thick), formed by stone blocks weighing 6 tonnes in places, legend has it that Perseus enlisted the help of a Cyclops, one of the one-eyed giants described in the Odyssey, to build Mycenae.

Archaeological evidence indicates that the palaces of the Mycenaean kingdoms declined sometime around 1200 BC and the palace itself was destroyed around 1180 BC, possibly by fire. Whether the destruction was the work of outsiders or due to internal division between the various Mycenaean kingdoms remains unresolved. Through the entrance gate, it's worth stopping by the Ancient Mycenae Museum (entrance included in the general ticket price) for additional context.

Lion Gate
Agamemnon's fortress is entered through the dramatic Lion Gate, a solid construction of massive stone blocks over which rear two large lions. This motif is believed to have been the insignia of the Royal House of Atreus.

Grave Circle A
Once inside the citadel, Grave Circle A is on the right. This was the royal cemetery and contained six grave shafts. Five shafts were excavated by Schliemann between 1874 and 1876, uncovering one of the richest archaeological hauls ever to be found, including a well-preserved gold death mask. Schliemann sent a telegram to the Greek king stating, ‘I have gazed upon the face of Agamemnon’, though the mask is thought to have belonged to a ruler who lived centuries before the era when the Trojan War might have taken place.

Agamemnon’s Palace
Follow the main path up to Agamemnon’s Palace, accessed through what was once a monumental doorway. The rooms on the north side of the palace were likely private royal apartments (where Agamemnon was supposedly murdered). On the palace's southeastern side is the megaron (reception hall where the great hearth would have been), with the column bases remaining. Beyond this are buildings that probably served as artisans' workshops. The valley views from the top of the hill here are phenomenal.

Secret cistern
Head down to the northeast extension, and you'll find the entrance to the secret cistern in the corner. This marvellous vaulted tunnel, a masterpiece of engineering at the time, descends via dark steps (half-heartedly roped off) to a spring. Follow the main path anticlockwise and on the northern boundary of the citadel you'll come across the Postern Gate, through which, it is said, Orestes escaped after murdering his mother, Clytemnestra.

Tombs
Until the late 15th century BC the Mycenaeans interred their royal dead in shaft graves; later they used a new form of burial – the beehive-shaped tholos tomb. Back outside the Lion Gate, head down to the tholos tombs of Aegisthus, with its collapsed roof, and Clytemnestra's Tomb, with its dramatic entrance and dome roof. Near the museum, the Lion Tomb is also impressive, while another Mycenae highlight, the Treasury of Atreus, also known as Agamemnon's Tomb, is found 500m down the road from the car park, beyond the main Mycenae site.

Two to three daily buses (excluding Sundays) head to Mycenae from Nafplio (journey time: one hour) via Argos. Buses stop in Mykines village, continuing the 1.3km to the site from April to October. A return taxi from Nafplio with waiting time is around €70.