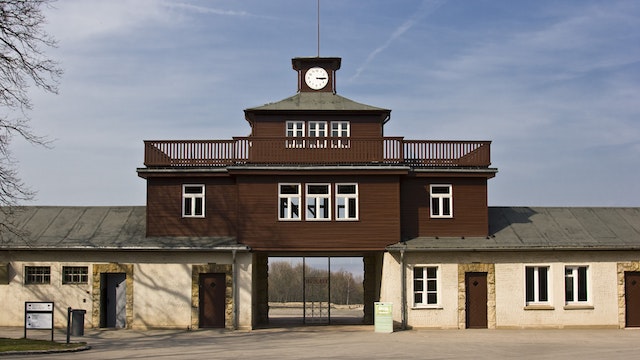 Between 1937 and 1945, hidden from Weimarers and surrounding villagers, 250,000 men, women and children were incarcerated here, some 56,500 of whom were murdered. Buchenwald ('Beech Forest') has been preserved almost untouched as a memorial, with visitors encouraged to wander quietly and freely around the numerous structures, including the crematorium. Tours, pamphlets and books in English are available, as are excellent multilanguage audio guides (€3, or €5 with images). Last admission is 30 minutes before closing.

After 1943, prisoners were exploited in the production of weapons, and many were disfigured and killed in grotesque rimentation. Shortly before the end of the war, some 28,000 prisoners were sent on death marches. Between 1937 and 1945, more than one-fifth of the 250,000 people incarcerated here died.

On 11 April 1945, as US troops approached and the SS guards fled, the emaciated prisoners rebelled, overwhelming the remaining guards and liberating themselves. The clock tower above the entrance still shows the precise time of the rebellion – 3.15pm.

Before you enter the main compound, you'll notice an enormous monument to your left, which you can walk right up to. The monument is perched atop a small mountain with remarkable views; publications from the museum store explain the symbolic significance of its many elements.

After the war, the Soviet victors established Special Camp No 2 here, in which 7000 so-called anticommunists and ex-Nazis were literally worked to death. Their bodies were found after the Wende in mass graves north of the camp and near the Hauptbahnhof.

The camp and memorial are 10km northwest of Weimar. To get here, take bus 6 (direction Buchenwald) from Goetheplatz in Weimar. By car, head north on Ettersburger Strasse from Weimar station and turn left onto Blutstrasse (Blood Road).