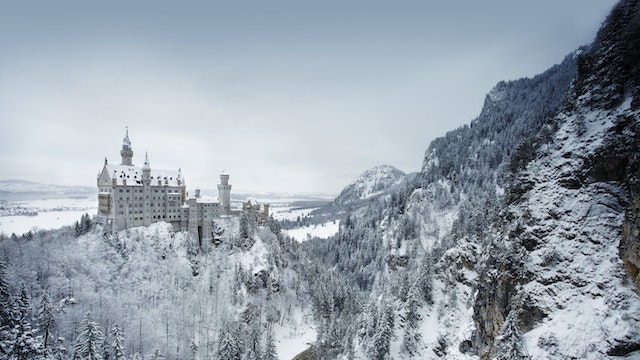 Appearing through the mountaintops like a mirage, Schloss Neuschwanstein was the model for Disney’s Sleeping Beauty castle. King Ludwig II planned this fairy-tale pile himself, with the help of a stage designer rather than an architect. He envisioned it as a giant stage on which to recreate the world of Germanic mythology, inspired by the operatic works of his friend Richard Wagner. The most impressive room is the Sängersaal (Minstrels’ Hall), whose frescos depict scenes from the opera Tannhäuser.

Built as a romantic medieval castle, work started in 1869 and, like so many of Ludwig’s grand schemes, was never finished. For all the coffer-depleting sums spent on it, the king spent just over 170 days in residence.

Completed sections include Ludwig’s Tristan and Isolde–themed bedroom, dominated by a huge Gothic-style bed crowned with intricately carved cathedral-like spires; a gaudy artificial grotto (another allusion to Tannhäuser); and the Byzantine-style Thronsaal (Throne Room) with an incredible mosaic floor containing over two million stones. The painting opposite the (throneless) throne platform depicts another castle dreamed up by Ludwig that was never built (he planned many more). Almost every window provides tour-halting views across the plain below.

The tour ends with a 20-minute film on the castle and its creator, and there's a reasonably priced cafe and the inevitable gift shops.

For the postcard view of Neuschwanstein and the plains beyond, walk 10 minutes up to Marienbrücke (Mary’s Bridge), which spans the spectacular Pöllat Gorge over a waterfall just above the castle. It’s said Ludwig enjoyed coming up here after dark to watch the candlelight radiating from the Sängersaal.