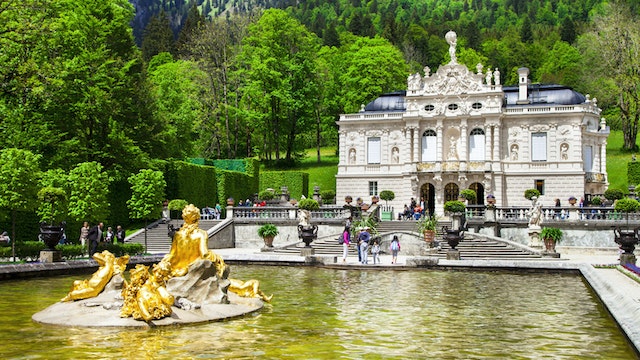 A pocket-sized trove of weird treasures, Schloss Linderhof was Ludwig II’s smallest but most sumptuous palace, and the only one he lived to see fully completed. Finished in 1878, the palace hugs a steep hillside in a fantasy landscape of French gardens, fountains and follies. The reclusive king used the palace as a retreat and hardly ever received visitors here. Linderhof was inspired by Versailles and dedicated to Louis XIV, the French ‘Sun King’.

Linderhof’s myth-laden, jewel-encrusted rooms are a monument to the king’s excesses that so unsettled the governors in Munich. The private bedroom is the largest, heavily ornamented and anchored by an enormous 108-candle crystal chandelier weighing 500kg. An artificial waterfall, built to cool the room in summer, cascades just outside the window. The dining room reflects the king’s fetish for privacy and inventions. The king ate from a mechanised dining board, whimsically labelled ‘Table, Lay Yourself’, that sank through the floor so that his servants could replenish it without being seen.

Created by the famous court gardener Carl von Effner, the gardens and outbuildings, open April to October, are as fascinating as the castle itself. The highlight is the oriental-style Moorish Kiosk, where Ludwig, dressed in oriental garb, would preside over nightly entertainment from a peacock throne. Underwater light dances on the stalactites at the Venus Grotto, an artificial cave inspired by a stage set for Wagner’s Tannhäuser. Now sadly empty, Ludwig’s fantastic conch-shaped boat is moored by the shore.