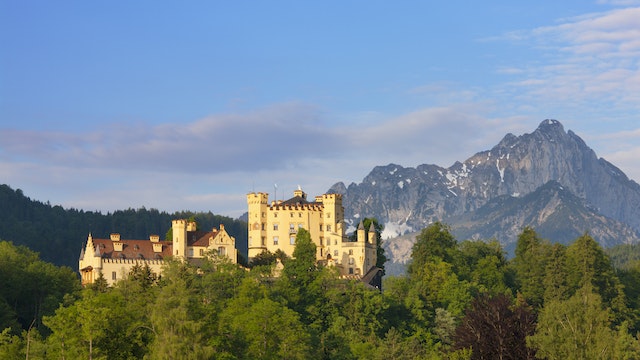 King Ludwig II grew up at the sun-yellow Schloss Hohenschwangau and later enjoyed summers here until his death in 1886. His father, Maximilian II, built this palace in a neo-Gothic style atop 12th-century ruins left by Schwangau knights. Far less showy than Neuschwanstein, Hohenschwangau has a distinctly lived-in feel where every piece of furniture is a used original. After his father died, Ludwig’s main alteration was having stars, illuminated with hidden oil lamps, painted on the ceiling of his bedroom.

It was at Hohenschwangau where Ludwig first met Richard Wagner. The Hohenstaufensaal features a square piano where the hard-up composer would entertain Ludwig with excerpts from his latest creation. Some rooms have frescos from German mythology, including the story of the Swan Knight, Lohengrin. The swan theme runs throughout.