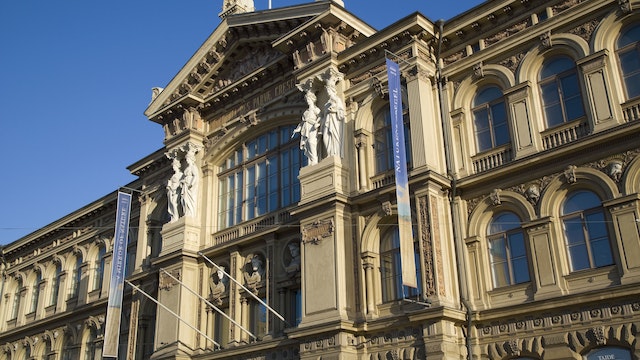 Occupying a palatial 1887 neo-Renaissance building, Finland’s premier art gallery offers a crash course in the nation’s art. It houses Finnish paintings and sculptures from the ‘golden age’ of the late 19th century through to the 1950s, including works by Albert Edelfelt, Hugo Simberg, Helene Schjerfbeck, Pekka Halonen and the von Wright brothers. Pride of place goes to the prolific Akseli Gallen-Kallela’s triptych from the Finnish national epic, the Kalevala, depicting Väinämöinen’s pursuit of the maiden Aino.

There’s also a small but interesting collection of 19th- and early 20th-century foreign art, including the first-ever Van Gogh purchased by a museum, Street in Auvers-sur-Oise (1890), which was acquired in 1903.

On the ground floor is a contemporary Finnish cafe/restaurant, the Ateneum Bistro, along with a good bookshop and reading room. One-hour guided tours in English (included in admission) take place at noon on the second and fourth Sunday of the month.