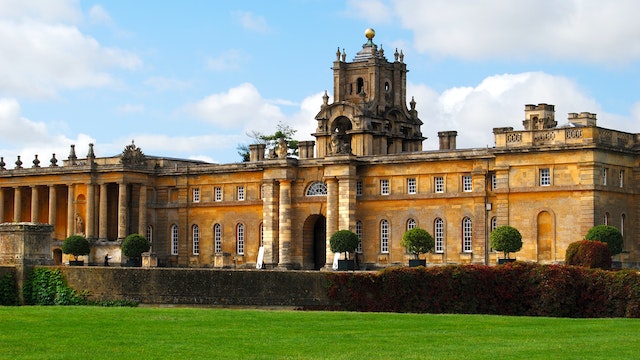 One of the greatest stately homes in Britain, and a Unesco World Heritage Site, Blenheim Palace is a monumental baroque fantasy, designed by Sir John Vanbrugh and Nicholas Hawksmoor, and built between 1705 and 1722. Queen Anne gave both the land, and the necessary funds, to John Churchill, Duke of Marlborough, as thanks for defeating the French at the 1704 Battle of Blenheim. Sir Winston Churchill was born here in 1874, and Blenheim (blen-num) remains home to the 12th duke.

Inside, beyond majestic oak doors, the palace is stuffed with statues, tapestries, sumptuous furniture, priceless china and giant oil paintings in elaborate gilt frames. Visits start in the Great Hall, a soaring space that's adorned with images of the first duke and topped by a 20m-high ceiling. From here, you can either wander through the various grand state rooms independently, or join one of the free 45-minute guided tours, which depart every 30 minutes (except on Sunday, when guides are stationed in all rooms). Highlights include the famous Blenheim Tapestries, a set of 10 large wall hangings commemorating the first duke's triumphs; the State Dining Room, with its painted walls and trompe l’Iœil ceilings; and the magnificent Long Library, overlooked by an elaborate 1738 statue of Queen Anne, where the 56m ceiling was decorated by Nicholas Hawksmoor

Upstairs, in the Untold Story, a phantom chambermaid leads visitors on a half-hour audio-visual tour of tableaux that recreate important scenes from Blenheim's history. Between February and September you can also join additional tours (adult/child £5/4.50) of the Duke's private apartments, the palace bedrooms or the household staff areas.

A separate sequence of rooms downstairs holds the Churchill Exhibition, included in the ticket price and dedicated to the life, work, paintings and writings of Winston Churchill. Official history has it that the future prime minister, grandson of the 7th duke and cousin of the 9th, was born by chance at the palace, after his mother went into premature labour. It’s widely believed, however, that the tale was concocted to conceal that she was already pregnant when she married his father, seven months earlier. Winston Churchill is buried in the local parish church in Bladon, 1.5 miles south, just outside the grounds.

If the crowds in the house become too oppressive, escape into the vast, lavish gardens and parklands, parts of which were landscaped by the great Lancelot 'Capability' Brown. Immediately outside, two large water terraces hold fountains and sphinxes, while a minitrain (50p) takes visitors to the Pleasure Gardens, where features include a yew maze, adventure playground, lavender garden and butterfly house.

For quieter and longer strolls, there are glorious walks of up to 4.5 miles, leading past lakes to an arboretum, rose garden, cascade, and Vanbrugh's Grand Bridge. Look out for the Temple of Diana, where Winston Churchill proposed to his future bride, Lady Clementine, on 10 August 1908.