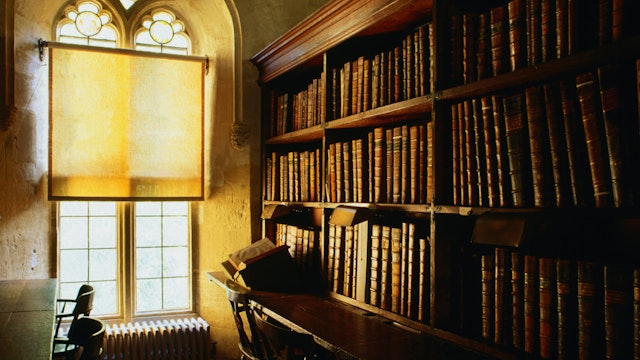 At least five kings, dozens of prime ministers and Nobel laureates, and luminaries such as Oscar Wilde, CS Lewis and JRR Tolkien have studied in Oxford's Bodleian Library, a magnificent survivor from the Middle Ages. Wander into its central 17th-century quad, and you can admire its ancient buildings for free. Both Blackwell Hall and the exhibition rooms in the Weston Library can be visited free of charge, while tours give you access to more of the complex.

All tours, including the two most popular daily options – the ‘mini-tour’ (30 minutes, £6) and the ‘standard tour’ (one hour, £9) – start in the ornate medieval Divinity School, the university's earliest teaching room. A superb specimen of English Gothic architecture, it was founded around 1423. Inspect its fan-vaulted ceiling closely, and you’ll spot the initials of benefactors, including Thomas Kemp, who features 84 times, who worked on it, as well as three ‘Green Men’. In the Harry Potter films, the Divinity School served as the Hogwarts hospital wing.

Every tour also includes on the upper level, which dates from 1488. Visitors are not allowed to enter this magnificently decorated medieval room, or peruse the ancient tomes that it contains, just admire it from the adjoining 17th-century extension. It too featured in the Harry Potter films, as Hogwarts’ library.

The standard tours additionally take in two grand chambers at the far end of the Divinity School – Convocation House, which hosted the English Parliament three times, once under Charles I and twice under Charles II, and the Chancellor’s Court, in which Oscar Wilde and Romantic poet Percy Bysshe Shelley went on trial (for debt and promoting atheism, respectively).

Less frequent ‘extended tours’ cover the same ground while also offering the only public access to the nearby Radcliffe Camera, which houses part of the Bodleian’s collection.

Check tour times online or at the information desk; tickets for all tours can be purchased up to two weeks in advance. Note also that a selection of ‘Bodleian Treasures’ is displayed in the nearby Weston Library.