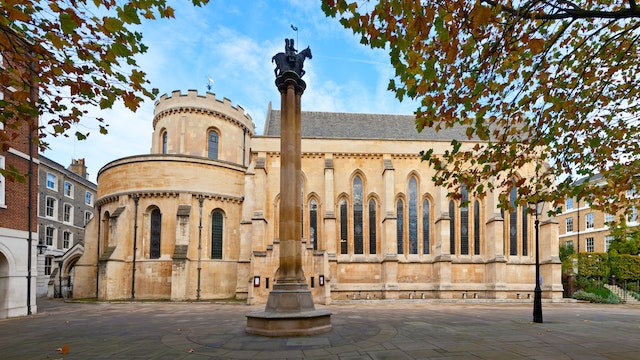 The magnificent Temple Church was built by the secretive Knights Templar, an order of crusading monks founded in the 12th century to protect pilgrims traveling to and from Jerusalem. Today, the sprawling oasis of fine buildings and pleasant, traffic-free green space is home to two Inns of Court: Inner Temple and Middle Temple.

The Temple Church has a distinctive design and is in two parts: the Round (consecrated in 1185 and believed to have been modelled after the Church of the Holy Sepulchre in Jerusalem) adjoins the Chancel (built in 1240), which is the heart of the modern church. The west door and elaborately moulded porch are outstanding examples of Norman architecture. Both parts of the church were badly damaged by a bomb in 1941.

The church's most obvious points of interest are the life-size stone effigies of nine 13th-century knights lying on the floor of the Round. In 1214–15, it was the site of vital negotiations for Magna Carta. It's one of just four round churches left in England.

A key part of the book The Da Vinci Code by Dan Brown was set at Temple Church, and scenes from the 2006 movie of the same name were filmed there.

Temple Church is closed to visitors currently, and all services are livestreamed on the church's YouTube channel.