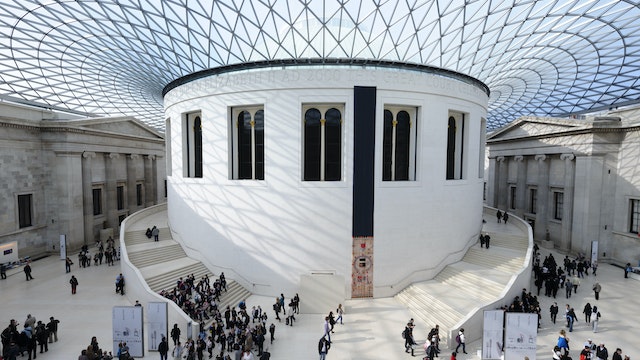 With almost six million visitors trooping through its doors annually, the British Museum in Bloomsbury, one of the oldest and finest museums in the world, is Britain’s most visited attraction. Through the varied (and occasionally controversial) collection, you'll see some of the world's greatest treasures, and learn a little more about how England sees the world today.

You could spend a lifetime navigating this vast and hallowed collection of artefacts, art and age-old antiquity and still make daily discoveries. If you're not sure where to start, join a tour or pick up a Highlights map, a self-guided hour-long tour, for a precis of the museum’s treasures. Whatever your approach, there are several blockbusters you don't want to miss: the Rosetta Stone, the key to deciphering Egyptian hieroglyphics (head upstairs for the Egyptian mummies); the controversial Parthenon sculptures, taken from Athens' Acropolis by Lord Elgin (British ambassador to the Ottoman Empire); and the vast Etruscan, Greek, Roman, European, Asian and Islamic galleries. Other must-see items include the Anglo-Saxon Sutton Hoo Ship Burial relics and the winged bulls from Khorsabad.

Begun in 1753 with a "cabinet of curiosities" sold to the nation by physician and collector Sir Hans Sloane, the collection mushroomed over the ensuing years through acquisitions, bequests and the indiscriminate plundering of the empire. The grand Enlightenment Gallery was the first section of the redesigned museum to be built in 1823.

The light-filled Great Court, restored and augmented by architect Norman Foster in 2000, has a spectacular glass-and-steel roof. In the center is the Reading Room where Karl Marx researched and wrote Das Kapital; Virginia Woolf and Mahatma Gandhi were also cardholders.

It's free to visit the permanent collections at the British Museum, but there are charges for special exhibitions. In order to control visitor numbers, you need to book a timed slot online ahead of arrival.