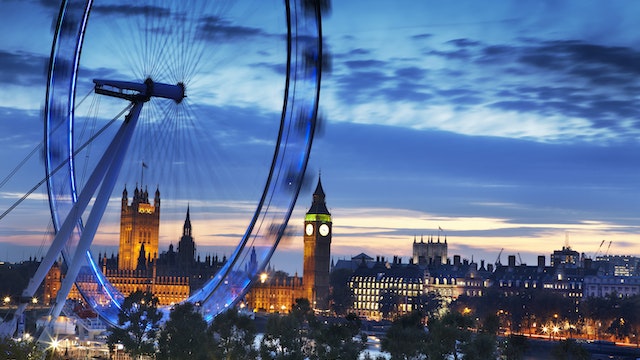 It’s hard to imagine South Bank without the London Eye (officially named the lastminute.com London Eye after its current sponsor), the world’s largest cantilevered observation wheel, which began twirling in 2000 to mark the turn of the millennium. It was originally a temporary attraction, intended to be dismantled after five years, but its unceasing popularity has ensured its longevity. Standing 135m tall in a fairly flat city, it has fundamentally altered London's skyline and is visible from various viewpoints.

A ride – or "flight" as it is called here – in one of the wheel’s 32 glass-enclosed eye-shaped pods takes a gracefully slow 30 minutes and, weather permitting, you can see 25 miles (as far as Windsor Castle) in every direction from the top. Don't let poor weather put you off: the close-up views of the Houses of Parliament, just across the river, are the highlight of the ride. Interactive tablets provide multilingual information about landmarks as they come up in the skyline.

The London Eye is the focal point of the capital's New Year's Eve fireworks, for which it is rigged with thousands of fireworks.

London Eye tickets and other practicalities

Tickets must be pre-booked to ride the London Eye. If you're planning to take a river cruise or visit other sights, such as Madame Tussauds or the Sea Life London Aquarium, you're likely to save money by buying a combination ticket.

Tube stations Waterloo (Northern, Jubilee and Bakerloo Lines) and Westminster (Jubilee, Circle and District Lines) are both within five minutes' walk of the London Eye.