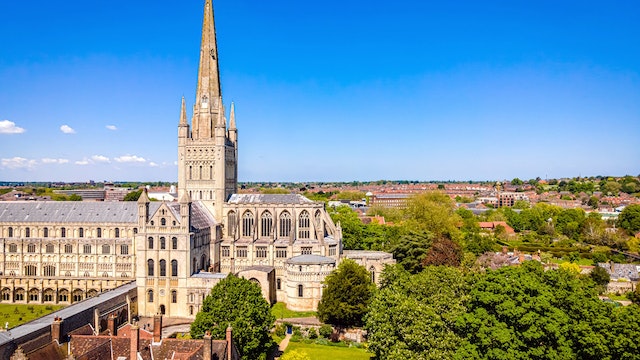 Norwich's most impressive landmark is a magnificent Anglican cathedral. Its barbed spire soars higher than any in England except Salisbury's, while the size of its cloisters is second to none. Highlights include the mesmerising ceiling, the ornate roof bosses, and the striking modern features of the Hostry. The 50-minute guided tours (donation requested, hourly Monday to Saturday, 11am to 3pm) are an engaging way to find out more.

Work started on the cathedral in 1096 and it remains one of the finest Anglo-Norman abbey churches in the country. The sheer size of its nave is striking, but its most renowned feature is the superb Gothic rib vaulting added in 1463. Among the spidery stonework are 1200 sculpted roof bosses depicting Bible stories. Together they represent one of the finest achievements of English medieval masonry.

Similar bosses can be seen in closer detail in the cathedral's remarkable, two-storey cloisters. Built between 1297 and 1430, they are unique in England and were originally built to house a community of about 100 monks.

Above the bronze font (which came from a nearby chocolate factory), look out for Censing Angel (2012) – a suspended celestial figure woven out of willow branches by sculptor Joy Whiddett, trailing the words 'peace', 'hope' and 'love'.

Outside the cathedral's eastern end is the grave of the WWI heroine Edith Cavell, a Norfolk-born nurse who was executed for helping hundreds of Allied soldiers escape from German-occupied Belgium. The handsome cathedral close also contains the old chapel of King Edward VI School (where naval hero Admiral Nelson was educated). Today's students make up the choir, which performs in services.