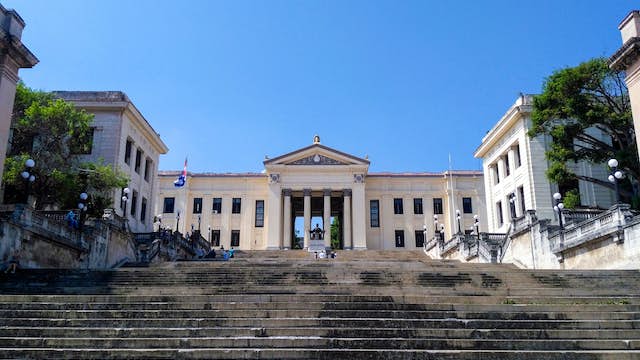 Founded by Dominican monks in 1728 and secularized in 1842, Havana's university began life in Habana Vieja before moving to its present site in 1902. The existing neoclassical complex dates from the second quarter of the 20th century, and today some 30,000 students take courses here in social sciences, humanities, natural sciences, mathematics and economics.

Perched on a Vedado hill at the top of the famous escalinata (stairway), near the Alma Mater statue, the Plaza Ignacio Agramonte (the university's central quadrangle) displays a tank captured by Fidel Castro's rebels in 1958. Directly in front is the Librería Alma Mater (library) and, to the left, the Museo de Historia Natural Felipe Poey, the oldest museum in Cuba, founded in 1842 by the Royal Academy of Medical, Physical and Natural Sciences. Many of its specimens of Cuban flora and fauna date from the 19th century. Upstairs in the faculty of biology is the Museo Antropológico Montané, established in 1903, with a rich collection of pre-Columbian artifacts, including the 10th-century wooden Ídolo de Tabaco.