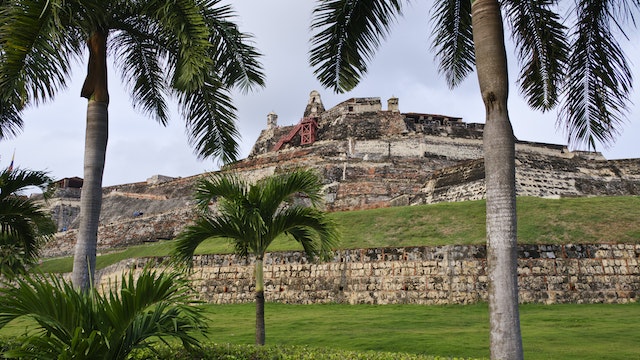 The greatest fortress ever built by the Spaniards in any of their colonies, the Castillo de San Felipe de Barajas still dominates an entire section of Cartagena's cityscape. It should definitely be the first fortress you visit. The original edifice was quite small. It was commissioned in 1630, and construction began in 1657 on top of the 40m-high San Lázaro hill. In 1762 an extensive enlargement was undertaken, which resulted in the entire hill being covered with this powerful bastion.

It was truly impregnable and was never taken despite numerous attempts to storm it. A complex system of tunnels connected strategic points to allow provisions to be distributed and to facilitate evacuation. The tunnels were constructed so that any noise reverberated all the way along them, making it possible to hear the slightest sound of an approaching enemy's feet, and also making internal communication easy.

Some of the tunnels are lit and are open to visitors – an eerie walk not to be missed. Take an audio tour (COP$10,000 in English) or hire a guide (Spanish/English COP$15,000/20,000) if you want to learn more about the curious inventions of Antonio de Arévalo, the military engineer who directed the construction of the fortress.

The fortress is a short walk over the bridge from Getsemaní.