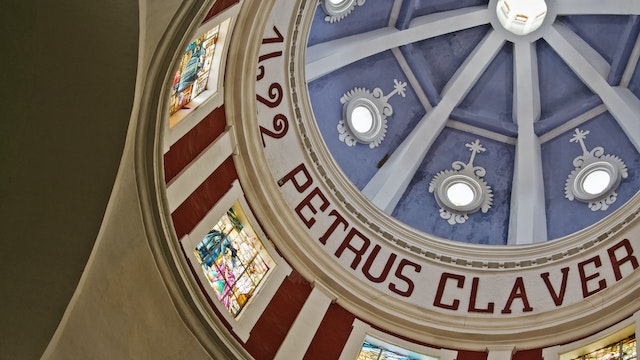 Founded by Jesuits in the first half of the 17th century as Convento San Ignacio de Loyola, this convent later changed its name to honor Spanish-born monk Pedro Claver (1580–1654), who lived and died here. Called the 'Apostle of the Blacks' or the 'Slave of the Slaves,' the monk spent his life ministering to enslaved people brought from Africa. A series of lucid paintings inside the building relates his life story.

The convent is a monumental three-story building surrounding a tree-filled courtyard, and much of it is open as a museum. Exhibits include religious art and pre-Columbian ceramics; a section devoted to contemporary Afro-Caribbean pieces includes wonderful Haitian paintings and African masks.

You can visit the cell in the convent where San Pedro Claver lived and died, and also climb a narrow staircase to the choir loft of the adjacent church. Should you need one, guides (COP$32,000 in English for a group of up to seven) are available at the ticket office. Completed in the first half of the 18th century, the Iglesia de San Pedro Claver has an imposing stone facade, and inside there are fine stained-glass windows and a high altar made of Italian marble. The remains of San Pedro Claver are kept in a glass coffin in the altar – his skull is visible.