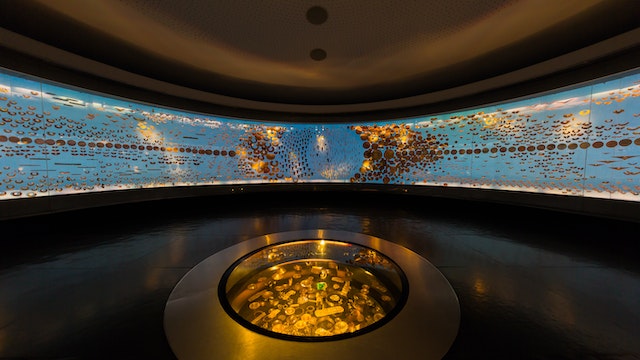 Bogotá's most famous museum and one of the most fascinating in South America, the Gold Museum contains more than 55,000 pieces of gold and other materials from all of Colombia's major pre-Hispanic cultures. The collection is laid out in logical, thematic rooms over three floors; descriptions are in Spanish and English.

Second-floor exhibits break down findings by region, with descriptions of how pieces were used. There are lots of mixed animals rendered in gold (eg jaguar-frog, human-eagle); note the female figurines indicating how women of the Zenú in the pre-Columbian north played important roles in worship.

The 3rd-floor 'Offering' room exhibits explain how gold was used in ceremonies and rituals. Some of the displayed tunjos (gold offerings, usually figurines depicting various aspects of social life) were thrown into the Laguna de Guatavita; the most famous one, found near the town of Pasca in 1969, is the unlabeled gold boat called the Balsa Muisca. It's uncertain how old it is, as generally only gold pieces that include other materials can be carbon dated.

There's more to understanding the stories than the descriptions can convey, so try taking a free one-hour tour (11am and 4pm Tuesday through Saturday; in Spanish and English) – tours vary the part of the museum to be highlighted. Audio guides (COP$8000) are available in Spanish, English, French and Portuguese.

The museum gets exceedingly busy on Sunday, when entry is free.