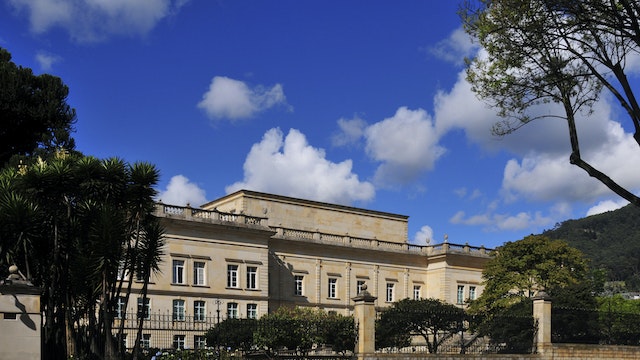 On the south side of Plaza de Bolívar, beyond the Capitolio Nacional and reached via Carreras 8 or 7, this is Colombia's neoclassical presidential building, where the country's leader lives and works. To visit, you'll need to email or go to the website and scroll down to 'Visitas Casa de Nariño' under 'Servicios a la Ciudadanía'. No permission is needed to watch the changing of the presidential guard – best seen from the east side – held at 3:30pm Wednesdays, Fridays and Sundays.

The building is named for Antonio Nariño, a colonial figure with ideas of independence and who secretly translated France's human-rights laws into Spanish – and went to jail for it, a couple of times. In 1948 the building was damaged during El Bogotazo riots and only restored in 1979. Register in advance for 45-minutes tours at 9am, 10:30am, 2:30pm and 4pm during the week; 2:30pm and 4pm on Saturday; and 3pm and 4pm on Sunday. Note: guards around the president's palace stand at barriers on Carreras 7 and 8. It's OK to pass them, just show the contents of your bag and stay clear of the fence-side sidewalks.