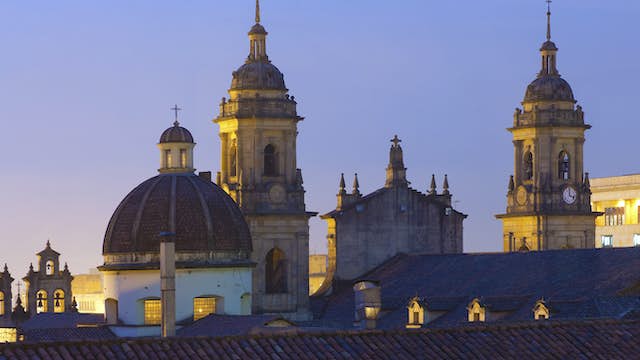 This neoclassical cathedral stands on the site where the first Mass may have been celebrated after Bogotá was founded in 1538 (some historians argue that it happened at Plazoleta del Chorro de Quevedo, just east). Either way, it's Bogotá's largest cathedral. It's also the main plaza's most dominating building, facing from the northeastern corner.

The original simple thatched chapel was replaced by a more substantial building from 1556 to 1565; this later collapsed due to poor foundations. In 1572 the third church went up, but the earthquake of 1785 reduced it to ruins. Only in 1807 was the massive building that stands today initiated, and it was successfully completed by 1823. It was partly damaged during the Bogotazo riots in 1948. Unlike those of many Bogotá churches, its spacious interior has relatively little ornamentation. The tomb of Jiménez de Quesada, the founder of Bogotá, is in the largest chapel off the right-hand aisle.