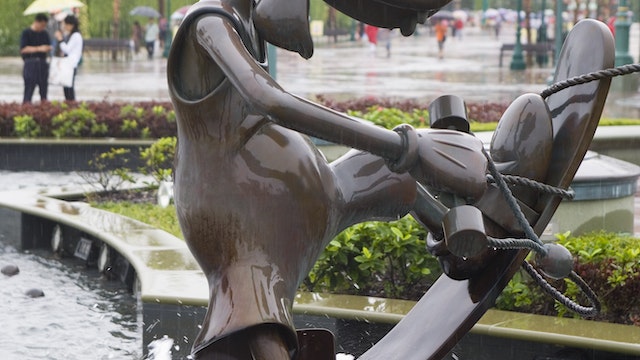 Disneyland serves as a rite of passage for the flocks of Asian tourists who come daily to steal a glimpse of one of America’s most famous cultural exports. It’s divided into seven areas – Main Street USA, Tomorrowland, Fantasyland, Adventureland, Toy Story Land, Mystic Point and Grizzly Gulch – but it's still quite tiny compared to the US version, and most of the attractions are geared towards families with small children.

Ride highlights include the goofy-scary tour through the Mystic Manor, and classics such as 'It's a Small World', the Mad Hatter teacups, and a Sleeping Beauty Castle that is currently being transformed into a grander version of itself. A Frozen-themed zone will unveil in 2020, with entertainment, dining and shopping based around the popular cartoon.

Adrenalin junkies also have true thrills to look forward to, like the whipping-through-utter-darkness Space Mountain roller coaster in Tomorrowland, the Big Grizzly Mountain coaster in Grizzly Gulch and the stomach-dropping RC Racer half-pipe coaster in Toy Story Land. An entire Marvel-themed area is planned, launching in phases from 2018 to 2023. The first is an enclosed-cabin flight simulation in the Iron Man Experience ride already in operation.

While most of Hong Kong Disney is essentially a scaled-down version of the American Disneyland, there are a number of nods to Chinese culture. Disney consulted a feng-shui master when building the park, and ended up moving the entrance 12 degrees to avoid chi slipping into the ocean. The lucky number eight is repeated throughout the park (the Western mining town of Grizzly Gulch was said to be founded on 8 August 1888), and Canto-pop singer Jacky Cheung is the park's official spokesperson.

There's a parade daily through Main Street at 3.30pm, and a music, light and fireworks show centred on Sleeping Beauty's Castle nightly at 8pm. As in any Disney theme park, costumed characters wander around ready to be greeted by excited children.

Disneyland is linked by rail with the MTR at Sunny Bay station on the Tung Chung line; passengers just cross the platform to board the dedicated train for Disneyland Resort station and the theme park. Journey times from Central/Kowloon/Tsing Yi stations are 24/21/10 minutes respectively.