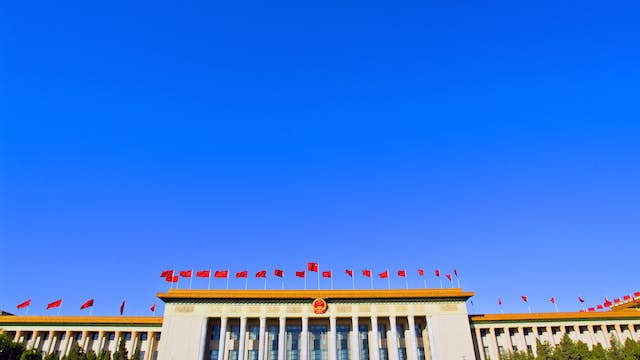 Flanked by triumphalist Soviet-style buildings, Tian'anmen Sq is an immense void of paved stone (440,000 sq metres, to be precise) at the symbolic centre of the Chinese universe. Watched over by Mao's portrait (and the eyes of hundreds of security personnel), it's an iconic if disquieting place for a stroll. Highlights on the square itself include the daily flag-raising (and lowering) ceremony, Mao's mausoleum and the Zhengyang Gate. Access is via the underpasses beside Tian'anmen East and Tian'anmen West subway stations (Line 1).

The rectangular arrangement of the square, echoing the layout of the Forbidden City, to some extent pays obeisance to traditional Chinese culture, but most of its ornaments and buildings are Soviet-inspired. Mao conceived the square to project the power of the Communist Party, and during the Cultural Revolution he reviewed parades of up to a million people here. The ‘Tian'anmen Incident’, in 1976, is the term given to the near-riot in the square that accompanied the death of Premier Zhou Enlai. Another million people jammed the square to pay their last respects to Mao in the same year. Most infamously, in 1989 the army forced pro-democracy demonstrators out of the square. Hundreds – possibly thousands – lost their lives in the surrounding streets, an event the Chinese government has spent the intervening decades removing from the national consciousness. Contrary to widespread belief, it is thought that few if any were killed in the square itself. The famous 'tank man' photo was taken not on the square but from a balcony of the Beijing Hotel on Chang'an Jie; now Beijing Hotel NUO.

Early risers can watch the daily flag-raising ceremony at sunrise, performed by a troop of People’s Liberation Army (PLA) soldiers marching at precisely 108 paces per minute, 75cm per pace. The soldiers emerge through the Gate of Heavenly Peace to goose-step impeccably across Dongchang’an Jie (the reverse ceremony is performed at sunset). In the centre of the square is the Monument to the People’s Heroes, a 40m-tall obelisk emblazoned with calligraphy from Mao and Zhou Enlai, while behind it sits the Chairman Mao Memorial Hall, where Mao's body lies inside a glass coffin. At the foot of the square, the magnificent Zhengyang Gate can be climbed for superb views and an exhibition of historical photographs showing the area as it was at the beginning of the last century.