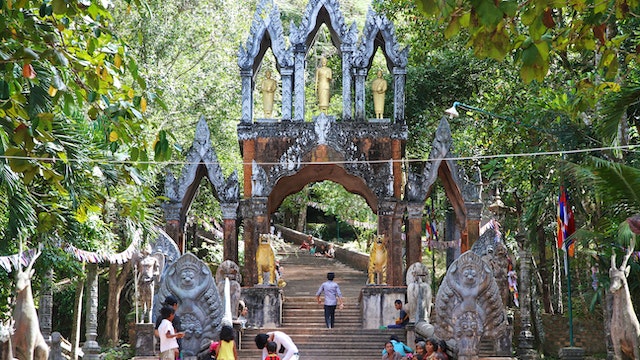 Considered by Khmers to be the most sacred mountain in Cambodia, Phnom Kulen is a popular place of pilgrimage on weekends and during festivals. It played a significant role in the history of the Khmer empire, as it was from here in 802 CE that Jayavarman II proclaimed himself a devaraja (god-king), giving birth to the Cambodian kingdom. Attractions include a giant reclining Buddha, hundreds of lingas carved in the riverbed, an impressive waterfall and some remote temples.

From the entrance a sealed road winds its way through some spectacular jungle scenery, emerging on the plateau after a 12km ascent. The road eventually splits: the left fork leads to the picnic spot, waterfall and ruins of a 9th-century temple; the right fork continues over a bridge (you'll find the riverbed carvings around here) to the base of Wat Preah Ang Thom, which sits at the summit of the mountain and houses the large reclining Buddha carved into the sandstone boulder upon which it is built. This is the focal point of a pilgrimage for Khmer people, so it is important to take off your shoes and any head covering before climbing the stairs to the sanctuary. These days the views from the 487m peak are partially obstructed by foliage run amok.

The waterfall is an attractive spot and was featured in Lara Croft: Tomb Raider. However, it could be much more beautiful were it not for all the litter left here by families picnicking at the weekend. Near the top of the waterfall is a jungle-clad temple known as Prasat Krau Romeas, dating from the 9th century.

There are plenty of other Angkorian sites on Phnom Kulen, including as many as 20 minor temples around the plateau, the most important of which is Prasat Rong Chen, the first pyramid or temple-mountain to be constructed in the Angkor area. Most impressive of all are the giant stone animals or guardians of the mountain, known as Sra Damrei (Elephant Pond). These are quite difficult to reach, particularly during the wet season. The few people who make it, however, are rewarded with a life-size replica of a stone elephant – a full 4m long and 3m tall – and smaller statues of lions, a frog and a cow. These were constructed on the southern face of the mountain and from here there are spectacular views across the plains below. Getting to Sra Damrei requires taking a moto from Wat Preah Ang Thom for about 12km on very rough trails. Don’t try to find it on your own; expect to pay the moto driver about US$10 for a two-hour trip to explore this area and carry plenty of water.

Other impressive sites that could be included in an adventurous day trip around Phnom Kulen include the ancient rock carvings of Poeung Tbal, an atmospheric site of enormous boulders, and the partially restored temple of Damrei Krap. Add these to the mix and it will cost more like US$15 to explore for three hours or more.

Phnom Kulen is a huge plateau around 50km from Siem Reap and about 15km from Banteay Srei. To get here on the toll road, take the well-signposted right fork just before Banteay Srei village and go straight ahead at the crossroads. Just before the road starts to climb the mountain, there is a barrier and it is here that the admission charge is levied. It is only possible to go up Phnom Kulen before 11am and only possible to come down after midday, to avoid vehicles meeting on the narrow road. There is a new road under construction that links Phnom Kulen to Svay Leu, a small town to the east of the holy mountain, so a one-way system may eventually be introduced: ascending the mountain by the old road and descending via the new road. There are plenty of small restaurants and food stalls located around the parking area at the base of Wat Preah Ang Thom.

Moto drivers are likely to want about US$20 or more to bring you out here, and rented cars will hit passengers with a surcharge, more than double the going rate for Angkor; forget coming by remork as the hill climb is just too tough. With the long journey here, it is best to plan on spending the best part of a day exploring, although it can be combined with either Banteay Srei or Beng Mealea.