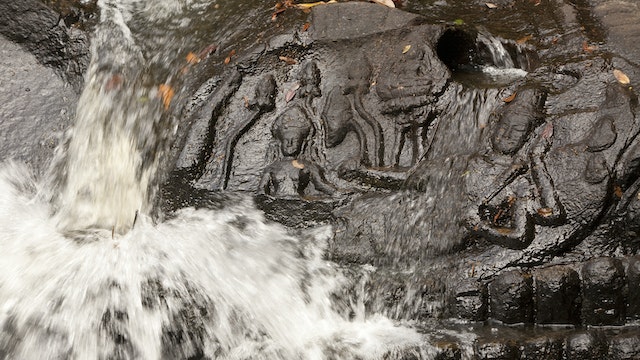 A spectacularly carved riverbed, Kbal Spean is set deep in the jungle to the northeast of Angkor. More commonly referred to in English as the ‘River of a Thousand Lingas’, the name actually means ‘bridgehead’, a reference to the natural rock bridge here. Lingas (phallic symbols) have been elaborately carved into the riverbed, and images of Hindu deities are dotted about the area. It was ‘discovered’ in 1969, when ethnologist Jean Boulbet was shown the area by a hermit.

It is a 2km uphill walk to the carvings, along a pretty path that winds its way up into the jungle, passing some interesting boulder formations along the way. Carry plenty of water up the hill, as there is none available beyond the parking area. The path eventually splits to the waterfall or the river carvings. There is an impressive carving of Vishnu on the upper section of the river, followed by a series of carvings at the bridgehead itself, some of which were hacked off in the past few years, but have since been replaced by excellent replicas. This area is now roped off to protect the carvings from further damage.

Following the river down, there are several more impressive carvings of Vishnu, and Shiva with his consort Uma, and further downstream hundreds of lingas appear on the riverbed. At the top of the waterfall are many animal images, including a cow and a frog, and a path winds around the boulders to a wooden staircase leading down to the base of the falls. Visitors between January and June will be disappointed to see very little water here. The best time to visit is between July and December. When exploring Kbal Spean, it's best to start with the river carvings and work back down to the waterfall to cool off. From the car park, the visit takes about two hours including the walk, nearer three hours with a natural shower or a picnic. A day trip here can be combined with Angkor Centre for Conservation of Biodiversity, Banteay Srei temple and the Cambodia Landmine Museum.

Kbal Spean is about 50km northeast of Siem Reap or about 18km beyond the temple of Banteay Srei. The road is in great shape, as it forms part of the main road north to Anlong Veng and the Thai border, so it takes just one hour or so from town. There are food stalls at the bottom of the hill that can cook up fried rice or a noodle soup, or the fancier, excellent Borey Sovann Restaurant, located near the entrance.

Moto drivers will no doubt want a bit of extra money to take you here; figure on US$15 or so for the day, including a trip to Banteay Srei. Likewise, remork drivers will probably up the price to US$25 or so. A surcharge is also levied to come out here by car. Admission to Kbal Spean is included in the general Angkor pass; the last entry to the site is at 3.30pm.