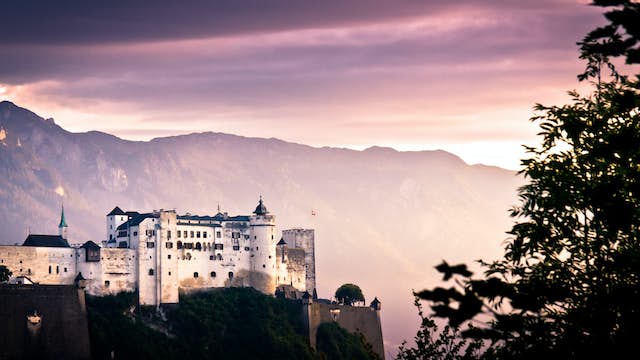 Salzburg's most visible icon is this mighty, 900-year-old clifftop fortress, one of the biggest and best preserved in Europe. It's easy to spend half a day up here, roaming the ramparts for far-reaching views over the city's spires, the Salzach River and the mountains. The fortress is a steep 15-minute walk from the centre or a speedy ride up in the glass Festungsbahn funicular.

The fortress began life as a humble bailey, built in 1077 by Gebhard von Helffenstein at a time when the Holy Roman Empire was at loggerheads with the papacy. The present structure, however, owes its grandeur to spendthrift Leonard von Keutschach, prince-archbishop of Salzburg from 1495 to 1519 and the city's last feudal ruler.

Highlights of a visit include the Golden Hall – where lavish banquets were once held – with a gold-studded ceiling imitating a starry night sky. Your ticket also gets you into the Marionette Museum, where skeleton-in-a-box Prince-Archbishop Wolf Dietrich steals the (puppet) show, and the Fortress Museum, which showcases a 1612 model of Salzburg, as well as medieval instruments, armour and some pretty gruesome torture devices.

The Golden Hall is the backdrop for year-round Festungskonzerte (fortress concerts), which often focus on Mozart's works. See www.salzburghighlights.at for times and prices.