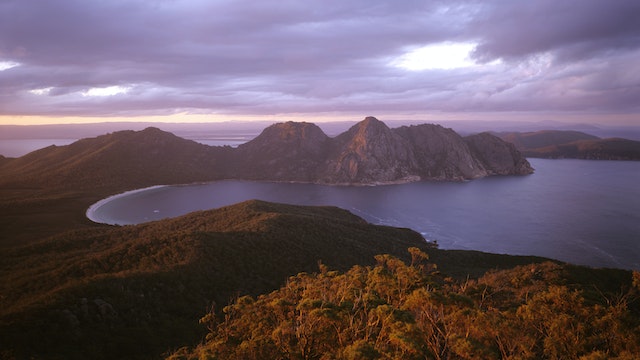 Framed by some of the state's finest beaches and rising into spectacular low mountains, Freycinet incorporates the southern end of Freycinet Peninsula, people-free Schouten Island and the lesser-known Friendly Beaches north of Coles Bay. A photogenic assembly of pink granite mountains, azure bays and white-sand beaches (including Tasmania's most famous beach, Wineglass Bay), the park was named after French navigator Louis de Freycinet and proclaimed in 1916, making it (along with Mt Field) Tasmania's oldest national park.

The bushwalking here is brilliant. Longer hikes include the three-day, 30km Freycinet Peninsula Circuit; shorter tracks include the up-and-over saddle climb to Wineglass Bay. Ascend the saddle as far as Wineglass Bay Lookout (one to 1½ hours return, 600 steps each way) or continue down the other side to the beach (2½ to three hours return). Alternatively the 500m wheelchair-friendly boardwalk at Cape Tourville affords sweeping coastal panoramas and a less-strenuous glimpse of Wineglass Bay. On longer walks, sign in (and out) at the registration booth at the car park; national park fees apply.

The park has a host of wildlife – black cockatoos, yellow wattlebirds, honeyeaters and Bennett's wallabies flap and bounce between the bushes, and you might catch glimpses of white-bellied sea eagles, dolphins or even whales.