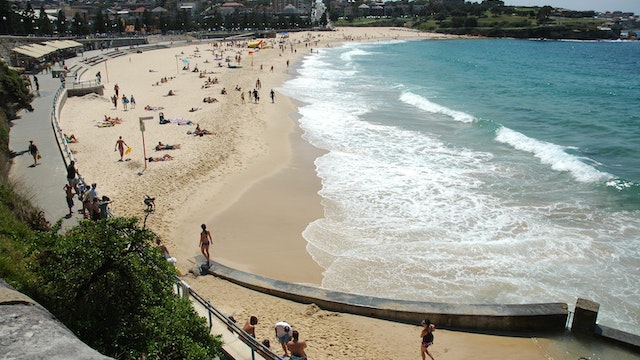 Bondi without the glitz and the poseurs, Coogee (locals pronounce the 'oo' as in the word ‘took’) has a deep sweep of sand, historic ocean baths and plenty of green space for barbecues and Frisbee hurling. There are lockers and showers here. Between the world wars, Coogee had an English-style pier, with a 1400-seat theatre and a 600-seat ballroom…until the surf took it.

Offshore, compromising the surf here a little, is craggy Wedding Cake Island, immortalised in a surf-guitar instrumental by Midnight Oil. At Coogee Beach’s northern end, below Dolphins Point, Giles Baths is what’s known as a ‘bogey hole’ – a semiformal rock pool open to the surging surf. At the beach’s southern end, Ross Jones Memorial Pool has sandcastle-like concrete turrets. A short walk beyond the beach are the McIver's and Wylie's sea pools.