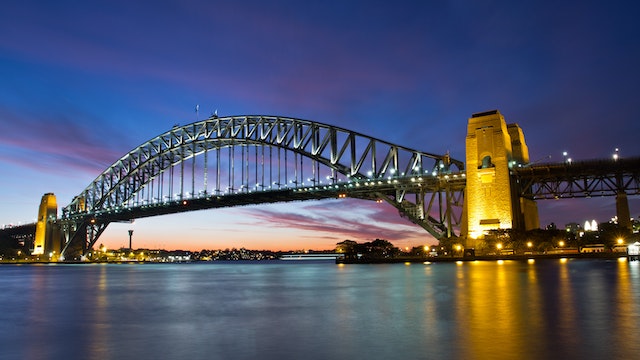 Sydneysiders love their giant 'coathanger', which opened in 1932. The best way to experience this majestic structure is on foot. Stairs and lifts ascend the bridge from both shores, leading to a footpath on the eastern side (the western side is a bike path).

Getting the train to Milsons Point and walking back towards the city offers the more spectacular views. Climb the southeastern pylon to the Pylon Lookout or tackle the arc on the popular if expensive, once-in-a-lifetime kind of experience, the BridgeClimb.

The BridgeClimb experience takes between 1.5 and 3 hours depending on which Climb you choose. A thorough safety briefing as well as special boiler suits, harnesses and a headset are provided. Climbers are given 15 mins to take photos at the top of the climb, but it’s a good hour to climb back down.

There’s also a climbing tour with an Aboriginal leader who will teach you more about the land, its First Nations custodians, and meaning behind Aboriginal place names in Sydney like Bennelong point where the Sydney Opera House sits, and original named Tubowgule by the Gadigal people here.

For many, climbing the Sydney Harbour Bridge is an bucket-list experience that a fear of heights has thwarted. The outfit offers support for those with acrophobia.

The harbour bridge is a spookily big object – moving around town you’ll catch sight of it in the corner of your eye, sometimes in the most surprising of places. Its enormous dimensions, the arch is 134m high (440 feet) from the top to the water and the span measures 503m (1650 ft). It’s the biggest (although not quite the longest) steel arch bridge in the world.

The two halves of chief engineer JJC Bradfield’s mighty arch were built outwards from each shore in what was a huge source of Depression employment. In 1930, after seven years of merciless toil by 1400 workers, the two arches were only centimetres apart when 100km/h winds set them swaying. The coathanger hung tough and the arch was finally bolted together. Extensive load-testing preceded the bridge's opening two years later.

Construction began in 1923 and the bridge opened in 1932 -- connecting Sydney city with the northern suburbs.

It has four railroad tracks, a multi-lane highway, a pedestrian walkway and a cycleway.

The bridge is made of 53,000 tonnes of steel, held together by reportedly six million hand-driven rivets (we’re not sure who’s willing to check that fact!).