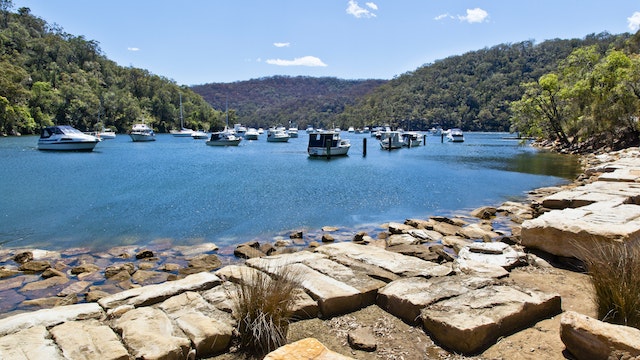 A spectacular mix of sandstone, Australian bushland and tranquil water vistas, this 14,928-hectare park forms Sydney’s northern boundary. It’s located 20 to 30km from the city centre and accessible by public transport, making a spectacular day trip from the city. It is a popular place to visit for its wilderness, its Aboriginal heritage, as well as activities such as walking, cycling, and kayaking. In winter add whale-watching to the reasons to visit.

The park takes in over 100km of coastline along the southern edge of Broken Bay, where it heads into the Hawkesbury River. There are two unconnected principal sections, Bobbin Head and the West Head area. The Barrenjoey headland at Palm Beach is also part of the park and the site of an historic lighthouse.

The second national park in Australia, Ku-ring-gai was created in 1894. Its name comes from its original inhabitants, the Guringai people, who were all but wiped out just after colonization through violence at the hands of settlers and the devastating introduction of smallpox. It’s well worth reading Kate Grenville’s The Secret River for an engrossing but harrowing telling of this story.

Remnants of pre-colonial Aboriginal life are visible today thanks to the preservation of more than 800 sites, including rock paintings, middens and cave art.

Elevated park sections offer glorious water views over Cowan Creek, Broken Bay and Pittwater. For information about walking trails, stop at the Bobbin Head Information Centre, operated by the NSW National Parks & Wildlife Service. There are a marina, picnic areas, a cafe and a boardwalk leading through mangroves at Bobbin Head.

Upper Gledhill Falls is a fairly easily accessible waterfall inside the park, and a popular ‘secret’ wild swimming spot for competent swimmers.

Further downstream along McCarrs Creek there’s a series of cascades including another swimming spot known as Duck Hole or Duck Pond with a large sandy bank on one side.

The Basin Campground is a remote camping spot accessed by ferry with basic facilities: a shower block, toilets, picnic tables and drinking water. Campers need to be well-prepared and self-sufficient. Sites are pre-booked via the NSW National Parks & Wildlife Service website

There are multiple picnic areas in the park, with toilets and drinking water taps; some also have BBQ areas.

As with all Australian national parks there are entry fees for vehicles, and per person per day. More information can be found on the NSW National Parks & Wildlife Service website on current fees and how to pay.

How to get to Ku-ring-gai Chase National Park

Access to the park is by the Palm Beach water taxi or by car via McCarrs Creek Rd (off Mona Vale Rd, Terrey Hills) for West Head; or via Bobbin Head Rd (North Turramurra) or Ku-ring-gai Chase Rd (Mount Colah) for Bobbin Head.

As well as camping and a YHA at Pittwater and Collaroy, accommodation options includes houseboats on the Hawkesbury River and a Sydney Lakeside Holiday Park in nearby Narrabeen.