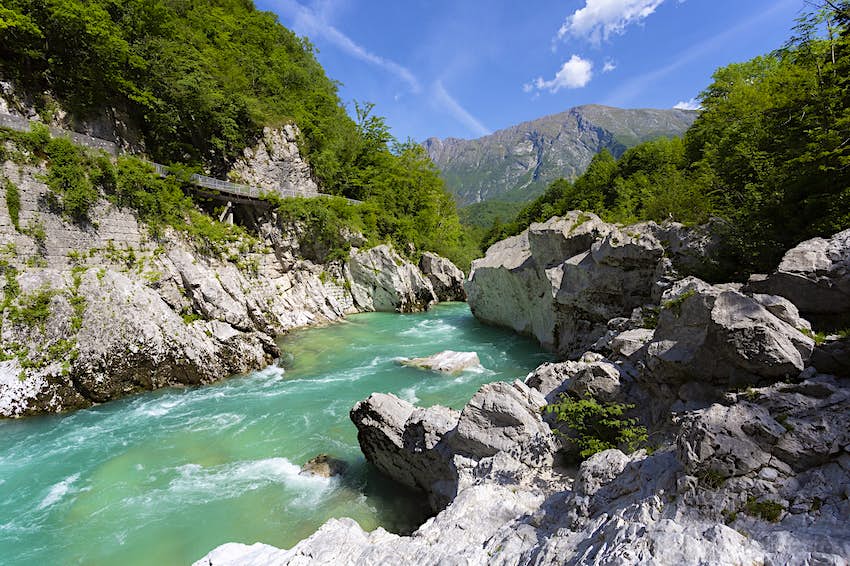 Soča River near Kobarid © Jure Batagelj, courtesy of the Walk of Peace Foundation

The Walk of Peace hiking trail connects the Alps to the Adriatic Sea along the former WWI frontline that once straddled the mountainous border between today’s Slovenia and Italy. However, the 11-stage route, which extends approximately 137 miles (220km) and passes through villages, under peaks, past glacial lakes, and across pristine rivers, is more than a trekking path. It is also a living history lesson, a string of museums and memorial sites, and a rolling food-and-wine experience.

Background to the trail

The trail, which launched in April 2020 and traverses four geographic regions, actually serves as the practical, trek-friendly spine of a larger 248 mile (400km) corridor established in 2000 by the Walks of Peace in the Soča Region Foundation. The foundation’s mission is to study, restore, preserve, and oversee the many important historical sites along WWI’s Isonzo Front, where 12 battles – between the Kingdom of Italy and the then Austro-Hungarian Empire (of which Slovenia was once part) – took place from 1915 to 1917. An estimated 350,000 soldiers, from 20 nations, perished during that 29-month period.

Today, this route – presently on Unesco’s Tentative List – is dedicated to open dialogue and respect for all cultures. In addition to the new trail, the Walk of Peace foundation has created a multitude of alternative hiking excursions and side routes off the main spine. Those loops lead visitors to more than 100 sites, including museums, churches, military cemeteries, and the ruins of trenches and battlements.

“As a hiker, this is one of my favorite paths because no person, or taste, gets left behind,” says Jan Klavora, a founder and partner of Visit Good Place, an adventure travel operator and sustainable tourism advocate. Klavora worked with the Walk of Peace foundation to create the 11-stage route that acts as the corridor’s main trail. “And you never have a lack of stimuli. The landscape, food, wine, and history lessons are always changing.”

The trail’s upper stages provide a geographic greatest hits as hikers pass through Slovenia’s Julian Alps. The route leaves from the village of Log pod Mangartom, which is located within the boundaries of Triglav National Park in the country’s northwest corner and in the shadow of its tallest peak, the 2864m Mount Triglav. From there, trekkers walk past waterfalls, military cemeteries, and outdoor museums with preserved trenches and tunnels, on the way to the town of Bovec and into the Soča Valley.

The path crosses and then follows the otherworldly green, crystal-clear, and glacial Soča River above the town of Kobarid, the site of the Walk of Peace Visitor Center. The Kobarid Museum is the bricks-and-mortar heart and soul of the trail. Loaded with permanent and temporary exhibitions, the museum is a swirl of photography, relics, and interactive displays bringing the conflict – and cultural understanding – to life.

The 36-room Hotel Mangart in Bovec is tucked in the Alps and has a sauna and whirlpool, and provides massages to combat trail fatigue.

The path parallels the Soča River to the east and the Italian border to the west as it continues south into the Brda Region and Slovenia’s wine country. Peaks slowly dissolve into rolling hills and perched villages, surrounded by the corduroy lines of distant, terraced vineyards.

Combine relaxed trekking with wine tastings. Make sure to sample Rebula, a refreshing white and the region’s most famous variety. On the way to the town of Šmartno, climb the 23m tower in the village Gonjače for expansive views of the vineyards. After, visit the Park of Peace – teetering on the Italian border and atop the 609m Sabotin Hill – and its series of preserved caves and fortifications for extra insight into the raw conditions soldiers faced.

The stages leaving the Brda Region descend to Trg Evrope (European Square; or Piazza Transalpina in Italian): a space shared by the cross-border towns of Nova Gorica, Slovenia, and Gorizia, Italy. After shaking off the day’s trail, a visit to the Museum of the Great War of Gorizia – complete with an interactive trench installation and artefacts from Austro-Hungarian and Italian soldiers – is a must.

Hotel Belica, in Goriška Brda, has a B&B feel with eight rooms, two apartments, and a wine cellar for tours and tastings.

Trek along the Adriatic

The Walk of Peace marches south and east into Slovenia’s Kras (or Karst) Region. A fantasy world for spelunkers, thousands of caves riddle the area’s porous limestone surface. Both the Pečinka Cave, which housed Austro-Hungarian troops, and the Krompir (potato) Cave, which was used as army storage, allow trekkers to rest and learn about this stretch of land, where resourcefulness was relied upon for survival. Highlights during the karst stages include military cemeteries for soldiers from across Europe, and the Monument of Peace, where a lookout tower takes in panoramas from the Alps to the sea.

The path takes a hard turn west for the last stages down to the Adriatic. The descent is complete when trekkers reach the town of Duino, on the Italian coast. The final hike parallels the shoreline all day until Trieste, which marks the trail’s end.

“Throughout the Walk, hikers should keep in mind the absurdity of warfare caused by kings and emperors, politicians and generals,” says Zdravko Likar, the president of the Walk of Peace Foundation’s board. “At the same time, [they should] admire the natural beauty and cultural values in which the area from the Alps to the Adriatic abounds.”

Celebrate the conclusion of your adventure in central Trieste with a stay at the stylish Seven Historical Suites.

The ultimate guide to hiking Hadrian's Wall
10 best peaks for beginner mountaineers
Six reasons to visit Slovenia, a gem at the heart of Europe

Article first published in March 2020, and last updated in July 2020