For nature enthusiasts, southern Africa is synonymous with the ‘big five’ - elephants, rhinos, leopards, lions and buffalo - all of which can be seen (with a bit of luck, of course) during a safari expedition through one of the region’s great parks or game reserves. While South Africa continues to hold court as the reigning safari destination, Mozambique, next door, is primed to be the beachy coda to your wildlife holiday with a whole other set of animals… underwater.

Largely untouchable during the 1980s and '90s due to a devastating civil war, the 2470km coastline of Mozambique (or the distance from London to Istanbul as the crow flies) feels as though it has been locked away in a time capsule, emerging only in the last 15 years for sand seekers. Development has been slow and purposeful, with stringent conservation laws preserving as much of the crystalline seaside as possible.

As the tourism infrastructure continues to blossom, Mozambique will undoubtedly take its place as a healthy competitor to the coterie of blissful beach destinations on the Indian Ocean like Mauritius and the Seychelles. For now, it remains the ideal place to seek out southern Africa’s submarine version of the ‘big five’: whale sharks, mantas, hammerheads, reef sharks and sea turtles.

Mozambique’s signature blend of beach lazing, seafood feasts and Iberian laissez-faire attitude is best enjoyed in the Bazaruto Archipelago, about halfway up the coast and near the small port town of Vilankulo (or Vilanculos). It is here that you’ll also find some of the finest diving along Africa’s eastern shores. Several choice scuba sites orbit the small collection of sandy islands, but the blockbuster diving spot is San Sebastian, located about 90 minutes south of the archipelago by speedboat.

At San Sebastian, a series of coral-clad pinnacles burst up from sea floor acting as beacons that lure large pelagic fish who come to feed, mate and clean. Shifting currents and deeper depths (25m to 40m) limits the experience to advanced divers, but it’s well worth brushing up on your scuba skills - especially between the months of May and mid-December when a veritable parade of marine life swims through. In fact, during November, divers will have a 99% chance of swimming with schooling whale sharks.

If you’re not keen to strap on a scuba mask, there are several other ways to explore the Bazaruto Archipelago’s magical underwater realm. Giant tides give snorkellers the opportunity to check out some of the deeper reefs when the waters are low. The area’s cache of creatures cavort around the ranches of coral at Two Mile Reef.

These offshore islets also create shallow channels filled with thick strands of seaweed that attract the only surviving colony of African dugong. Highly endangered, the gentle sea cows are monitored by a small team of locally based scientists who gladly invite curious travellers on their early morning survey boat rides. Although the dugongs can be rather elusive, a morning cruise never fails to impress as the gentle sunrise glistens on water while small groups of sea turtles surface to take gulps of fresh air before retuning to the blue.

Begin your adventure in southern Africa by flying into Johannesburg’s international airport, which is easily accessible via direct flight from many international cities including London (several daily; 11 hours), Sydney (daily; 12 hours) and New York City (daily; 15½ hours). For Johannesburg, you’re a short flight from your surf-ing adventures in Mozambique and your turf-ing safaris in South Africa.

Mozambique is decidedly off the radar (for now!), making it handsomely rewarding for those who do a fair bit of preplanning. It’s best to book this leg of the trip with a knowledgeable operator like Expert Africa (www.expertafrica.com). You’ll be matched with a destination expert who tailors your itinerary to your desires, and demystifies the trickier elements of the trip by organising your transfers, accommodation and visas.

Arrange your South African safari with &Beyond (www.andbeyondafrica.com), the leaders in luxury lodge accommodation, with a staff of hand-selected rangers and trackers. Their high-end camps are sprinkled along the riverine plains that wind through Sabi Sand Game Reserve and Kruger National Park, both rich with animal life. 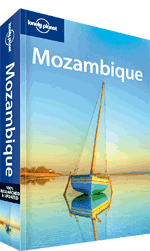