Welcome to the new Seville, a cleaner, greener and more breathable metropolis, where bikes, pedestrians and streamlined electric trams roam. This Spanish city has bidden adios to the organized urban chaos found in so many Mediterranean cities and embraced a more sustainable outlook.

After decades of driving chaos, the inauguration of Seville’s Sevici bike-sharing scheme in April 2007 was something of a godsend, even for avowed car users. Sevici was the second bike-sharing initiative in Spain (there are now nine), opening a few weeks after Barcelona’s Bicing programme. Despite subsequent copyists -- Paris’ Vélib was launched in 2009 -- it remains the fifth largest scheme of its kind in Europe, with 2500 bikes on offer. Grab a two-wheeled machine from any of the 250 docking stations and you will quickly discover that cycling suits this flat, balmy metropolis.

Most of Sevici’s 250,000 daily users are local, but visitors can take advantage of the sharing system by purchasing a seven-day pass online for 10 euros (plus a 150 euro returnable deposit). You will need to proceed to the nearest docking station and punch in the number from your coded receipt to get your bike. Seville has 120km of city bike lanes and the first 30 minutes of usage are free. Beyond that, it is one euro for the first hour and two euros an hour thereafter.

Cycling down Avenida de la Constitución, inhaling the aroma of ripe oranges, will bring you within a wheel’s width of museum-queuers, horses and carts, and attractive señoritas in red-and-white polka-dot dresses -- but no cars. Central Seville’s main arterial roads were pedestrianised in 2007 to make way for a new tram system, the MetroCentro.

The original tram-line -- a modest 1.4km in length -- was extended in 2011 to incorporate an extra 1.1km. At the same time, the introduction of revolutionary new battery-powered technology meant that ugly overhead cables could be dismantled. Stage three of the tram plan is to extend it as far as Santa Justa, Seville’s main railway station, where new high-speed trains head off to Madrid, Cádiz and (by 2013) Granada.

There is a tram stop right outside Seville’s majestic Gothic cathedral, its facade remarkably grime-free these days thanks to a noticeable drop in air pollution. The tram also connects with the bus station (at Prado de San Sebastián) and the new subterranean Metro (at Plaza Nueva).

On the drawing board since 1974, Seville’s Metro finally opened its first line in 2009. Twenty-two stations spread over 18km to connect the southern and western suburbs with the city centre, and reasonably priced tickets start at 1.35 euros. Three more lines are scheduled to be in operation by 2017.

If Seville’s reputation for crazy driving has not already dissuaded you, you could consider hiring an electric car to get around. Renault chose Seville as the city to launch its three new zero-emission models in October 2011, and ultimately these vehicles and others will be able to make use of 75 battery-recharging points that are being built around the city as part of Proyecto Movele, a government-sponsored plan to boost electric car use.

Finding parking remains a perennial problem. Seville has built over many of its traditional car parks, most recently in March 2011 with the daring, ultra-modern Metropol Parasol in the Plaza de la Encarnación, which harbours a museum (with Roman and Moorish ruins found on-site), a market, a restaurant, a plaza and a panoramic walkway. Professing to be an architectural icon in a liveable city core, this giant structure, purported to be the largest wood structure in the world, is best described as a forest of mushrooms welded onto a flying waffle. To date it has stoked as much controversy as the Eiffel Tower once did. But, for its defenders, its spirit represents an integral part of Seville’s new, forward-thinking urban experiment. 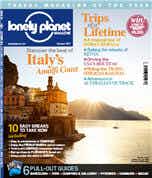 How to deal with bites and stings

The other side of the Algarve