From harbor villages where the scent of fresh chowder wafts through the air to lighthouse-studded coastlines, this winding journey takes you through the best of Canada's east coast.

The world's second-largest country has a massive Atlantic coastline, and the best way to tackle its awesomeness is by car or campervan. The landscape varies from sheltered coves of pine-covered offshore islands to high rock cliffs battered by waves and wind, and usually fronted by reams of grey-blue ocean. Head to the west coast of Nova Scotia and around to New Brunswick to visit the Bay of Fundy where the highest tides on the planet create sienna silt shorelines that change by the minute with the incoming or retreating waters.

Wherever you go you'll find storybook lighthouses, bucolic villages of white-picket homesteads and extremely friendly folk. The region is tied together by well-maintained roads where you can choose to take scenic country routes for leisurely exploration, or straight highways to cut down travel times. Good, clean campgrounds with RV hook-ups are everywhere or shack up at ubiquitous B&Bs.

Head west on HWY 333 stopping in at photo darling Peggy's Cove. The highlight here is a near-perfect lighthouse perched on a billow of bare granite boulders with crashing waves below. Take free tours on the local history and geology with the tourist office, or wander independently past fishers' houses on stilts, cluttered by crab traps.

From here the coast winds around inlets of evergreen islands until you reach historic Chester, which is known its ocean views and quaint, seaside village life. Soon after Chester is larger Mahone Bay, the sunniest town on the coast. Browse small craft shops in colourful 19th-century buildings or rent sea kayaks to trip around the 100 or so islands in the bay.

Lastly, stop at Lunenburg, a Unesco World Heritage Site, known for its distinctive 18th- and 19th-century architecture. Take a sailing cruise, hire bikes to tour the beaches of the peninsula, hop in a horse carriage to tour the town or just wander around the antique streets to see what you'll find.

Follow the three-day itinerary then cross over to Wolfville and the Bay of Fundy via HWY 12. Spend a day crisscrossing the country roads and grassy hills of Cape Blomidon to catch some of the most dramatic views of the Fundy tides.  The next day, drive east, stopping at wineries and shopping for unique jams, mustards and relishes at Tangled Garden (on HWY 1 near Grand Pre), where you can also cool down with a herb-flavoured ice cream.

Drive through mazes of rural roads and maybe get lost on the way to Maitland to sign up for a day of rafting the tidal bore in an inflatable dingy – depending on the phase of the moon this can be relaxing or one of the most adrenalin-charged experiences of your life.

On the last day head back to Halifax via east coast Martinique Beach, one of the longest beaches in Nova Scotia, a beautiful place for stretching legs and bird watching.

With more time you can go directly up to Cape Breton, along the circuitous roads of the 'Cabot Trail', over high sea vista points, where whales breach offshore and you have to watch for moose on the road. Those with more time can get the overnight car ferry to Newfoundland and continue on the 'Viking Trail' that links the fjord-filled Gros Morne National Park with Leif Eriksson's historic Viking settlement, L'Anse aux Meadows National Historic Site.

Outside of June to October the coast will be fiercely cold and most businesses will be shut. 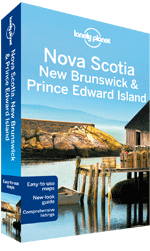