A weekend in the Wild West: Nevada’s historic towns

Lying between the outdoor charms of Lake Tahoe to the west and the hedonist charms of Vegas to the south, the small towns of Virginia City, Carson City and Genoa hold an appeal all their own, with plenty of historic and modern attractions to while away a weekend.

Spend a night in each to soak up the charm, following our suggested itinerary below.

For anyone looking to strike it rich, Vegas is a newcomer in the Nevada stakes – Virginia City was churning out millions way back in the 1860s thanks to the Comstock Lode, the first major silver deposit found in the United States. Discovered in 1859, the lode turned this overlooked chunk of western Nevada into a magnet for miners, and turned Virginia City from a no-horse town into a boozy, brawling, brotheling town almost overnight. By 1878 it was all but over, as the seams dried up. Today Virginia City is remarkably well preserved and manages to stay just the right side of kitsch. 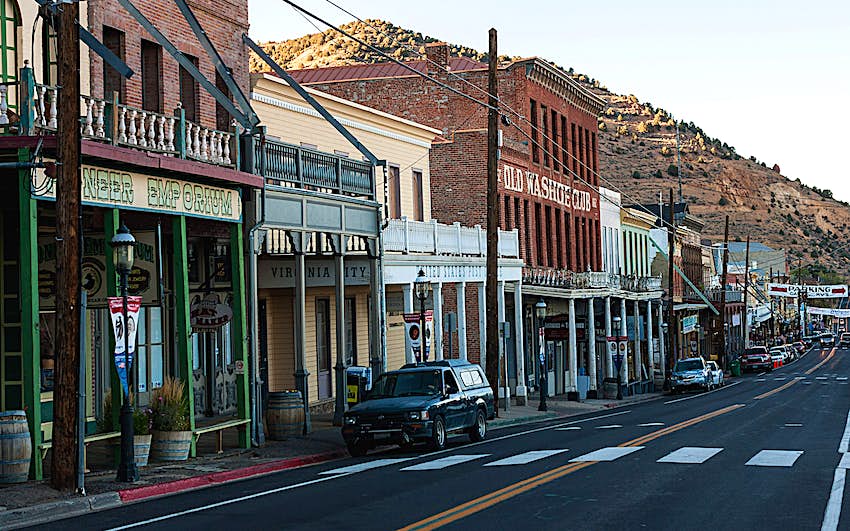 Virginia City's main street is as busy today with visitors as it was with miners in the 1860s - and just as pretty. Image by Alexander Howard / Lonely Planet

What to do
Although it’s basically a one-street town, it’s still worth taking the Trolley Tour to get your bearings and learn a bit of local lore. Did you know, for example, that Mark Twain's writing career took off here? Next take a look at the Way It Was Museum, a fun historical romp through the town’s history, before heading underground to explore the reason for Virginia City’s existence in an old mine. The Chollar and Best & Belcher mines run tours, the latter housed in the Ponderosa Saloon – make like a true nineteenth-century prospector by following up your subterranean trip with a drink at the bar. For information on these activities and more, go to the local tourism website. Once the sun goes down it’s spirits of a different sort to be (possibly) encountered on a Bats in the Belfry ghost tour (virginiacityghosttours.com). Virginia City has many supernatural stories associated with its silver-rush heyday and the tour includes stops at several of the town’s most historic buildings.

Where to stay
If the ghost tour hasn’t put you off and you feel like spending the night in an authentic (and reputedly haunted) saloon, try the Silver Queen (silverqueenhotel.net) on the main street, where almost every room comes with its own spook. Or a mile south of town is the Gold Hill Hotel & Saloon, claiming to be Nevada’s oldest hotel and with original features to support its claim.

Virginia City's saloons are the best places to enjoy some Wild West atmosphere, just as Mark Twain (pictured left) did when he worked here as a reporter for the local newspaper, the Territorial Enterprise. Image by Alexander Howard / Lonely Planet

Where to eat and drink
With so many visitors to be catered to, you won’t have any trouble finding filling (if not exactly haute-cuisine) food here. For daytime snacks (pastries, sandwiches) and coffee, Virginia City Baked Goods on C Street hits the spot, while a block or two north, the Red Dog Saloon (reddogvc.com) offers the perfect combo of tasty pizzas and live music in the evening.

In its 160-year history the fortunes of Carson City, Nevada’s capital, have fluctuated wildly. Booming on the back of the nearby silver rush in Virginia City (it even boasted its own mint) it then slumped when the mines dried up, only to stage a recovery in the 1940s. Today it’s a small but handsome town, with a core of interesting museums, good restaurants and fine buildings to easily occupy a few hours.

Nevada's state capitol is in Carson City, topped with a (not real) silver cupola. Image by Alexander Howard / Lonely Planet

What to do
The Nevada State Museum gives an overview of the Silver State’s history and geology, most interestingly in the rooms dedicated to money making in Carson City (the museum is partly housed in the old mint) and to local Native American cultures. A short stroll south, and standing in the middle of a leafy park, is the elegant 1870 capitol building, with the old senate chamber now holding a collection of state-related exhibits. A few more minutes south, this time by car, is the well maintained Nevada State Railroad Museum, an excellent collection of super-shiny old trains and super-keen railway enthusiasts.

Nevada State Museum houses a series of exhibits on the state's history, including reconstructions of mining communities. Image by Clifton Wilkinson / Lonely Planet

Where to stay
Other than the usual chain motels, Carson City has one stand-out, century-old sleeping option in Bliss Bungalow, just a few blocks west of the State Museum.

Where to eat and drink
Locals head to Red’s for its barbecue offerings, or the classic diner fare at Mom & Pops. For a few pints in a Nevadan take on a British pub, check out the red booths and on-tap beers in the Firkin & Fox.

Proudly displaying its ‘oldest town in Nevada’ credentials, Genoa (pronounced gen-OH-a) is a smaller and more polished place than Virginia City. Located in a beautiful pine-forested valley, it was originally a trading post founded in 1851 on the westward trail to California, and was more recently used as the set of the movie Misery. There’s nothing scary about the town today though: it’s a very attractive place with enough of interest to reward a day’s wandering.

What to do
The settlement of Genoa by Mormons is recalled in the Mormon Station State Historic Park, complete with a reconstruction of the home of early pioneer John Reese. Just across the road is the Genoa Courthouse Museum, where the town’s history is related in a series of exhibits, including a display on the famous-but-short-lived Pony Express which had a stop in the town.

Where to stay
Genoa is an easy day trip from Virginia City, Carson City and South Lake Tahoe, but one good reason to spend the night is to indulge yourself at David Walley’s Resort, a few miles south, where you can relax in one of six pools to wash away the Nevada dust as you lie back and enjoy the local landscape.

Follow in the footsteps of generations of visitors to Genoa by having a drink at Nevada's 'oldest thirst parlor'. Image by Alexander Howard / Lonely Planet

Where to eat and drink
The number one spot in town for getting a taste of the old west is the Genoa Saloon, the ‘oldest thirst parlor’ in the state and a great place to grab a drink and either get to know the locals inside or watch the world go by from the porch outside. Across the street, La Ferme (lafermegenoa.com) offers top quality French-influenced cooking on a working farm (hence the name).

The best jumping off point for your Wild West weekend is Reno, with an airport that connects with many other US destinations and plenty of car rental companies to get you on your way. A great option for extending your trip is to head west for the short drive to Tahoe where you can enjoy the views and activities the lake has to offer.

Clifton Wilkinson traveled to the Wild West with support from Travel Nevada. Lonely Planet contributors do not accept freebies in exchange for positive coverage.

8 min read • Published about 3 hours ago

5 min read • Published about 5 hours ago